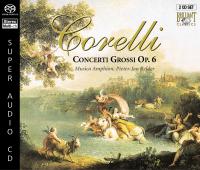 Arcangelo Corelli (1653-1715) was one of the key figures during the middle period of Baroque musical development. He lived and worked in Rome during a remarkable flowering of architecture, art, music and literature, partly inspired by the counter-Reformation. Money was poured into the arts from wealthy patrons, many of them clerics. Church music came foremost, with the development of oratorios and spiritual operas by Carissimi, Landi and Alessandro Scarlatti. Corelli himself was employed by some of the richest cardinals as a formidably equipped violinist, teacher and composer - at a time when the violin was still a relatively new instrument. His popularity as a virtuoso violinist went Europe-wide, and published editions of his compositions were snapped up instantly, influencing many other composers, even a generation later, including JS Bach.

The Concerti Grossi of Corelli's Op.6 were, it now appears, among his last works, probably performed at a celebrated series of Monday concerts in the palace of Cardinal Ottoboni. Corelli was not the inventor of the Concerto Grosso principle, but he saw the potentialities of the form, popularized it, and wrote the first great music for it. The idea of the form is to contrast two groups of string players, three of which (2 violins and cello) are fine soloists; the concertino group, with another group variously known as the concerto grosso or "ripieno" (two violins, viola and double bass) which has a mostly accompanying role. Each group has a figured bass in the score, which is improvised on the spot by players of a selection of instruments including harpsichord, archlute, theorbo, chittarone and double bass; these are known as the Continuo.

The music of the Concerto Grosso consists of several movements generally alternating fast and slow paces, usually with repeating themes which are known as ritornellos, which are variously treated by the musicians improvising suitable ornamentation. Depending on the location at which they were to be performed, in church or secular room (Concerto da Chiesa or Concerto di Camera), Concerti grossi tended to differ somewhat in musical content, the church ones more serious and exploratory, while in the case of Corelli's Op. 6 only the last four are Concerti di camera, and each is a set of dance movements, such as Corrente, Sarabanda or Menuetto (the last in quite fast 3/8 time, precursor of the 3/4 minuet which graced the symphonies of Haydn and Mozart).

We know from the household pay-books of Cardinal Pamphili and Cardinal Ottobone (both served by Corelli), that a normal sized orchestra would have been around 30-40 musicians, carefully balanced with the violins being half of the entire group, the other half divided more or less equally between violas, cellos and double basses. Archlutes were always present in the Continuo (up to 5), and harpsichords relatively rarely. For celebrations, orchestral numbers might rise to 70 or 80 (even (allegedly) to 150). However, the printed scores generally only contained one part per instrument, representing the minimum complement (this being the cheapest way of purchasing the music; buyers could copy their own extra parts if they were wealthy enough to support a larger ensemble).

If you wish to sample the full Ottoboni sound, there is an excellent version on period instruments by Ensemble 415, and a more chamber-orchestra sized performance by Pinnock and his English Concert can also be commended. The present recording by Musica Amphion opts for the purism of one-to-a-part on period instruments; this gives the greatest clarity of inner parts, and the warm ambience of the venue makes it seem as if there are many more than just seven strings plus continuo present.

The musicians of Musica Amphion are all players in one or more of the best-known European period instrument orchestras. Their sound is wonderfully open and sunny, with clear articulation even in the fastest virtuosic passages. Phrasing is expressive and suitably italianate, while full attention is given to the terraced dynamics of Baroque music, with Corelli's alternating piano and forte sections convincingly imitating echo effects. Tasteful and stylish improvised decorations are added, particularly at cadences, and these seem perfectly natural and pleasing to the ear. Repeats are mostly taken (the ensemble appears to be playing from a more up to date edition than my Augener's score). Remarkably for its time, Corelli takes special care in the writing for the viola part for these concertos, unusual because at the time the viola had a very low position amongst the string family. Musica Amphion's violist certainly makes the most of Corelli's opportunities. Praise also to the cellist, who in several movements has fast, moto perpetuo running passages, amusingly fraught with wide leaps and other pitfalls, but negotiated with great aplomb.

A variety of continuo instruments, sometimes varying from movement to movement, add much colour to the sound, as well as harmonic support and rhythmic underpinning. Following Corelli's own specifications, the concertino has a smaller and lighter continuo than does the ripieno. Listeners who shy away from period instruments should rest assured: the ensemble's sound is ingratiating, never abrasive or aggressive. Balance of strings and continuo is exemplary. Rhythms are buoyant and infectious, and Corelli's expressions of joy in the fast movements and contemplation or sadness in slow ones are delightfully explored.

Given a well-focussed stage perspective, with the concertino group just in front of an arc of concerto grosso players, the fine performances are so engaging that they invite listening to both discs in a single session. The warm, airy church acoustics (two sessions in different venues but very well matched) give a good facsimile of a large drawing room in a Roman cardinal's palace, particularly in surround mode.

Well-packaged with good notes in a standard double-CD jewel case, this set is a real bargain to be snapped up, and part of Brilliant Classic's much fêted complete Corelli project. Highly enjoyable! 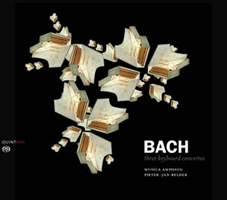