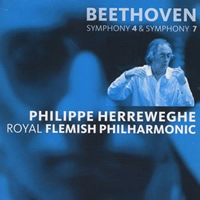 In the midst of all the excitement and/or controversy for the cycles from LSO/Haitink (LSO Live), Minnesota Orchestra/Vanska (BIS) and Polish CPO/Rajski (Tacet) it would be easy to overlook this release from Herreweghe and the Royal Flemmish Philharmonic on Talent. From the notes, it looks like this is the first release in a complete cycle.

Unlike the other cycles, this has some fascinating differences in approach from the others already in progress. Unsurprisingly, Talent has not chosen to follow the radical approach that Tacet uses (effectively or inexcusably depending upon ones point of view) in their recordings but the more traditional orchestra in front presentation.

Unlike Vanska, Herreweghe does not appear to use the new Del Mar edition (a great shame and surprise). The forces are audibly smaller than either Vanska or Haitink employs but the violins are split left and right as has become the norm these days. One fascinating and very rewarding feature which is unique is the use of "period" brass & timpani - this lends a rougher sound to the climaxes and these instruments cut through the textures more easily than in the other cycles. The sparse use of vibrato in the strings gives great clarity and, ironically, a heavier tone to the double basses than in, say, Vanska's cycle. Indeed, the overall impression is akin to listening to their Viennese cousins in this repertoire, except that they do not try and cover everything they touch with a golden sound - something that will appeal to those who prefer a roughly hewn & epic sound in Beethoven. Returning to other modern instrument cycles after this makes many sound smooth, perhaps too smooth.

With regard to the actual performances, there are more curious choices from Herreweghe. Many of the tempi would be considered conventional; indeed, once allowances are made for including repeats, many are remarkably similar to, if not slower than, Karajan's cycle from the 1960's! There are also occasional departures from what many would now consider to be acceptable practice (for example, there is a slight but marked ritardando into the allegro of the 4th symphony which many conductors would eschew these days) but these are, on the whole, small and shouldn't concern most listeners.

Apart from the timpani, brass & double basses being far more prominent than in many modern instrument performances, the overall orchestral balances are fairly conventional. The small size of the orchestra allows due weight to be given to the accents. The only reservation that some may have concerns the dynamic range employed by the orchestra (but it may equally be a source of great relief to others) - the difference between piano and pianissimo is far less than with Vanska and at no time does the ear strain to pick out the notes.

Altogether, this is a fascinating disc with lovely performances. I occasionally found myself wishing for speeds quicker than given here but with such wonderful accents and vibrant double bass playing - one cannot complain to any large extent. This is bound to fit the bill exactly for many listeners.

The recording, from a technical standpoint, is very fine and one cannot imagine it being improved upon in any way. The acoustic chosen (an old cinema!) is beautiful without a trace of unneeded resonance.

Recommended for a modern yet old-fashioned view of this giant of music. I have to say that I am looking forward to the remainder of the cycle as much as either the Vanska or Haitink set.