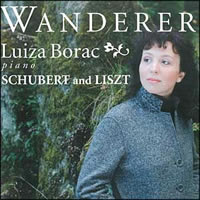 This disc is an interlude, if you will, between the current two volumes of Luiza Borac's Enescu series for Avie. Just as the Enescu discs are rightly famed, this is no less wonderful and for many might be more so, as it marries beautiful excerpts from Liszt's Annees de pelerinage with Schubert's miraculous Wanderer Fantasy.

In the Schubert, the tempi are perfectly judged by Borac and her articulation, which the Liszt confirms, is absolutely of the first rank of piano playing. The musicality is also a joy to behold, with no narcisisstic phrasing. Nor is there any hint of blandness - a difficult balance to obtain but Borac has found it here! The tone of the superb Steinway model D is also crystal clear and Borac imbues a beautifully delicate timbre for the Schubert. I find myself wanting to return to this wonderful music when played as well as this - surely the sign of a great performance.

The Liszt is no less successful, with a broadening of the tonal resources of the Steinway and an appropriately more romantic approach to the music. Throughout the highly varied excerpts chosen, Borac clearly identifies the musical line and "sings" these most convincingly. One wishes that at some stage in the not too distant future that she might be persuaded to offer the complete Annees de pelerinage such is the distinction and Lisztian musicianship on display here - at no time is one aware that Borac is aware of the possibility of playing to the gallery, this is simply a true recital which one wishes would never end. As all good things do, however, this recital comes to an end over the dazzling watery textures of Les jeux d'eau a la Villa d'Este. Like the Schubert, I want to replay this music over and over again...

The recording also, could hardly be bettered. It is a triumphant example of the piano on disc and a real demonstration of what this instrument can sound like in the hands of a true master of the keyboard if given a sympathetic engineering team, altough it must be said that the MCH layer provides a state of "naturalness" that is most believable when compared to the stereo layer.

I cannot recommend this disc too highly for any fans of Liszt, the piano or Borac. 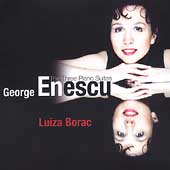 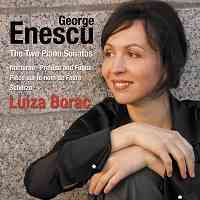