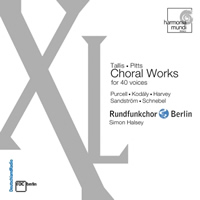 
A large-scale portrait of a large (and great) choir.

There is indeed scale and grandeur aplenty in this adventure in sonorities. Here is a rare occasion to relive five centuries of choral polyphony, from the forty (different!) voices of Thomas Tallis' famous motet Spem in Alium, to the admiring tribute to it by Anthony Pitts, appropriately named XL - as in 40 voices but also as in eXtra Large.

XL (which we are told stands for eXtra Large as well as the Roman numerals for 40) is, or should be, a showcase disc for the Rundfunkchor Berlin under their new (well, since 2001) music director Simon Halsey who just happened to make a journey from Birmingham's CBSO Chorus to Berlin around the same time as Simon Rattle swapped the cities orchestras.

Like some other issues of the Tallis Spem in Alium, this disc is quite rightly recorded "in the round". It opens and closes most tranquilly with the Gregorian chant "Veni, creator spiritus" later used in other pieces such as Mahler's 8th Symphony.

The Tallis is second and the singers surround the listener in MCH. Sadly the sopranos sound a little taxed at crucial high points of the work and compared to the stunning account on Tallis: Spem in Alium - Christophers, this is just isn't quite as magical, nor is it as well recorded with a quite high degree of congestion compared to the Harry Christophers version which here blurs some of the (intentional) dissonances. Purcell's "Hear my prayer, O Lord" follows and is much better sung and recorded.

Bach's Contrapunctus I is both played on the organ and then immediately followed by Schnebel's transcription for wordless choir. The organ is well captured and plays in an unaffected style but again there is some strained singing in sopranos.

The Harvey interpretation of "Come, Holy Ghost" is a modern interpretation for an 8-part choir of "Veni, creator spiritus". The music is nice and has the occasional interesting compositional effect without anything compelling one to listen repeatedly.

There then follows a most remarkable piece by Knut Nystedt "Immortal Bach" and from the basis of this I'd really like to explore more of his music. This piece starts with a 'straight' rendition of "Komm, süßer Tod" before being transfigured, phrase by phrase, in startlingly different ways by Nystedt with pitch, time and the synchronisation of parts all being varied. It really is a fantastic listen that is both entrancing and entirely relaxing - this is almost worth the price of the disc alone! Fortunately, the recording and the singing are fully up to the demands of this piece.

The longest work on this multifaceted disc is Kodaly's Laudes Organi, which apart from a having a large chorus also has a very prominent organ part. This is recorded in the Evangelische Auenkirche, Wilmersdorf (Berlin), with the remainder of items in Berlin's Teldex Studio, and sounds very much better than the rest of the disc. After a long opening section for organ alone, the choir gradually enters. Very enjoyable singing here, with nice direction from Halsey and a nice range of dynamics and colours exhibited from both chorus and organ.

Before the work from which the disc takes its' title, we are presented with Sven-David Sandström's "Hear my prayer, O Lord" based largely on Purcell's version heard earlier on this disc. The first half sounds almost identical (because it is!) before Sandström's voice reveals itself in the second half of the piece; some very interesting prolonging effects are added to Purcell's creation and it makes for a fascinating juxtaposition. Again, it is well sung and recorded.

The work "XL" comes from Antony Pitts and is his response, in three sections, to Tallis' masterpiece. The composition floats in and out of tonality, and whilst some of the notes for sopranos are just as high as elsewhere, there is no sense of strain. Like the Harvey, it is enjoyable without being entirely distinctive.

The recording employs many layouts in MCH which I shall briefly outline below:

Tallis & Pitts: 8 evenly spaced choirs in a circle around the listener
Purcell & Harvey: the "English" choral tradition, with Sopranos FL, Tenors FR, Basses RR, Mezzo sopranos RL (organ is placed centrally in front of us when used)
Schnebel: Four distinct rows, ordered from back to front as we face the ensemble, BTAS
Nystedt: The 5 mixed choirs are given one channel each, creating a wonderful sonic blanket of sound
Kodaly: The organ is placed behind the choir and we are situated towards the back of the Auenkirche

Altogether, this recording is a mixed bag with some marvellous tracks that generally compensate for the disappointing Tallis. Recommended overall with the odd reservation which prevents it from being the showcase disc that had been intended.