Ančerl's recordings of Mahler 1 and 9 were released by Tower Records in November 2018. What's upcoming is a complete set of Mahler's symphonies under the baton of Václav ... 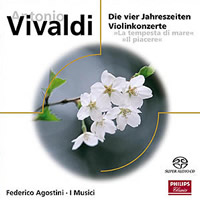 In a market totally overcrowded with recordings of these concertos any new version surely needs to have something special to recommend it, and it is a mystery as to why Universal have chosen this particular one to release at budget/mid-price on SACD.

It first appeared on CD in 1990 and added yet another version to the Philips catalogue in which I Musici accompanies a solo violinist. There were at least five of these at my last count.

Frederico Agostini and I Musici give a perfectly satisfactory middle-of-the-road performance, but with nothing distinctive that might make it especially recommendable. Even with the inclusion of a couple of extra concertos, that brings the total playing time up to a meagre 59 minutes, there are many finer CD versions available.

The 5.1 surround layer (no 2-channel SACD layer is provided on any of these Eloquence re-issues) mastered from a 16Bit / 44.1kHz original is also somewhat disappointing.

The soloist, who certainly does play well in a ‘pre-period’ style, is spotlit too much, and the re-mastering has given both him and I Musici a rather glassy and artificial sound. There is a good stereo spread but little depth. In the first minute of ‘Spring’ you can clearly hear in the background the sound of a car driving away and there are other extraneous noises at times in the other movements. On this occasion the rear channels add little to the listening experience.

The presentation is shoddy even for a budget release. There are no notes on the music or information as to the recording date and location, just a single sheet advertising five other Eloquence SACDs. 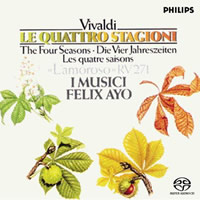