Light of the Spirit - Choir of Clare College Cambridge 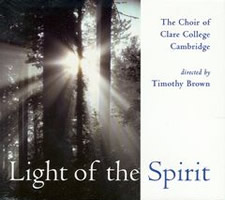 "Light of the Spirit"

This 2-SACD set collects together re-masterings of the highly acclaimed Clare College Choir RBCD albums 'Illumina' (runner-up, Gramophone Awards 2000) and 'Blessed Spirit'. Directed by Timothy Brown and produced by the indefatigable John Rutter, the discs were recorded in the peerless acoustic of Ely Cathedral's Lady Chapel in June 1999 and March 2000. No doubt the carefully constructed programme owes much to Rutter's encyclopaedic knowledge of sacred choral music. The first disc, 'Illumina', presents a study of musical and poetic descriptions of Light in a variety of styles and periods from Gregorian Chant to Ligeti; the second, 'Blessed Spirit', portrays a Christian soul's journey from departure (death), through the gates of Heaven to the heavenly kingdom.

Clare College's medium-sized mixed choir show an astonishing ability to adapt to each of the distinctive styles represented here. Superbly well-pitched, the singing is extraordinarily finely-nuanced, expressive and fervent in response, surrounded always by the near-perfect acoustic of the Lady Chapel, whose Medieval builders knew how to acoustically enhance human voices. The very deep bass foundation voices register clearly and frisson-makingly in the densest of textures, setting off the radiant pureness of sweet female voices and gleaming tenors.

Ranging through a gamut of emotions, the choir's sound ranges from the most caressingly hushed singing to huge climaxes, where their open-throated full tone is simply thrilling. These are no mere sing-throughs for recording's sake, but deeply considered and fully honed interpretations, no doubt borne of considerable experience and long hours of practise. A wide-sound stage allows the many combinations of voices from monophonic chanting to SSSSAAAATTTTBBBB divisions and double-choir work to contribute spatially to the music. This is particularly well heard in the wonderful 5.0 multichannel track, which takes the listener fully into the Lady Chapel.

There are many gems in these two programmes. Where else can your hear the Josquin Desprez, Rachmaninov, Tschaikovsky, and Gustav Holst versions of 'Nunc dimittis', as well as 'The Evening Hymn' (Hail Gladdening Light) by Wood, Rautavaara, Grechaninov and Tchaikovsky so conveniently juxtaposed? The soaring radiance of the women's voices in the rhapsodic hymns by the remarkable Hildegard of Bingen is deeply sensual, setting of the strongly rhythmic but more ascetic Byrd. Two Spirituals in excellent arrangements by director Timothy Brown and the fine American arranger Rueben Thomas don't sound in the least bit incongruous; they both bring out the longing for freedom of the slaves, yet are devotional and comforting in turn. Ligeti's extraordinary 'Lux aeterna', used by Kubrick to evoke the Cosmos in his film '2001', was, like Holst's 'Nunc dimittis', very much ahead of its time. His 16-part chorus suggests the strange and eyrie, ending with a long-held note-cluster which initiates a marvellously complex acoustic response from the ancient Lady Chapel's own space. The very music of Creation, as it were, slowly fades away into the dark recesses of the building.

Here are two well-filled (76:22 and 71:34), excellent discs, superbly recorded, with cleverly arranged programmes which have a cumulative effect. Not only are they a tribute to the stunning musicianship of the Clare College Choir and its director, but they would form an excellent basis for a beginner's collection of sacred choral music. I certainly wouldn't be wrecked on a proverbial Desert Island without them. In addition, each piece is given not only translations into English, but cogent and very informative notes.

A great tribute to the joy of singing together, not to be missed.