Hui Zhu, do the liner notes of Stereo Sound reissue SACDs show the name of the remastering engineer, or the mastering facility? The only Stereo Sound SACDs I have heard, ...

The Stereo Saond disc is much worse than Esoteric's. The sound is thinner, it lacks body. Esoteric's sounds much more natural. My Stereo Saund record is going to ebay soon. 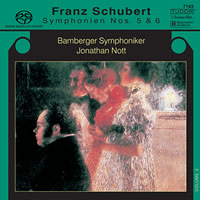 Opening this disc is, possibly, one of Schubert's most sunny compositions - the fifth symphony. The Allegro is played in a marvellously relaxed yet energetic way; delightful stuff. The Andante con moto is played as if a song and is very well paced by Nott; the contrasting sections are well painted in different tone colours and reflect the mood. Some might feel that the Allegro molto is not quite "molto" enough in the Menuetto but at no time does the phrasing let the music drag. The real disappoint of the disc then occurs, with an unaccountably slow Allegro vivace finale; whilst this is not highly charged and dramatic music, the tempo adopted here is in danger of inducing slumber. Coupled to this are some highly questionable reductions in tempo before an accelerando into the concluding phrases of each part of the movement. [Without excising any repeats, conductors like Abbado manage to complete this movement a full two minutes quicker (from 9'21 with Nott) and not sound at all breathless in the playing.]

Fortunately, after the disappointing end to the fifth symphony, the sixth is given a largely satisfying reading from Nott and the Bamberger Symphoniker. After the customary slow opening (apart from the fifth and seventh symphonies), the Allegro is well played although the weight of the playing occasionally threatens to drag a little; fortunately it doesn't but it's a close run thing! The coda is then dispatched with real vigour and elan and only shows to highlight the previous steadiness. A steady but by no means ponderous Andante is turned in with some delightfully sensitive phrasing which foreshadows the finale perfectly. The Scherzo is, by contrast, given a real Presto reading - the music veritably dances along and it is a measure of the Bamberg players quality that they relay the notes so admirably and under such control. The finale opens very cautiously, largely due to the measured Allegro moderato that Nott chooses, although this is nothing like as "moderato" as his account of the "Unfinished"; the lightness of touch exhibited by the Bamberg players is remarkable for the size of orchestra and prevents this from feeling too slow; it's a close judgement though and depends on how benevolent I am feeling!

As with the other recordings in this series, one feels that the venue is ever so slightly too resonant for this music (especially when combined with clearly large-scale forces) but it is clear enough (as is the playing) for the details to be heard without a score. 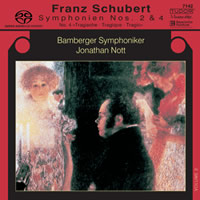 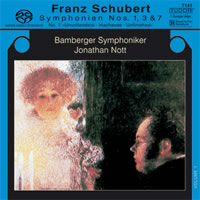 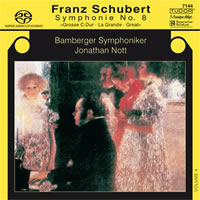 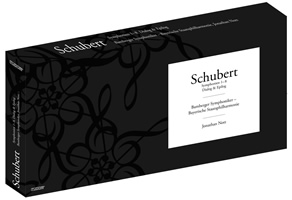 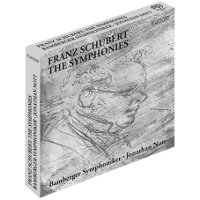