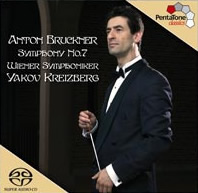 Bruckner: Symphony No. 7 in E major

This recording is a real pleasure. Bruckner's symphonies are perhaps an acquired taste but one that I acquired some years ago and now I love all of them. One important aspect of performing Bruckner is getting his (in)famous pauses correct. If you rush them they lose their intended impact; if you hold them too long, you lose the flow of the movement. Though Kreitzberg is still a young conductor, he manages this performance nicely. Nothing seems too rushed or too slow tempo-wise. He conveys this monumental music very well. I compared this to the 7th from Ozawa on Philips SACD and the Pentatone wins for both a performance and a recording.

Speaking of the recording, this is a live one and it is really spectacular. I really have no major quibbles but since I don't think there are any true 5 star recordings yet (in my rating system) it will get 4.5 from me. Though live, no applause is included but you can hear the cut in the fading ambience at the very end of the last mvmt presumably to eliminate the start of the ovation. Highly recommended.
Mark

Much as I respect the views of others that have commented on this recording, I cannot in all honesty recommend it from an artistic standpoint. The recording per se is admittedly gorgeous but as many would note, it is preferable to hear a mediocre recording of a stellar performance than the other way around and that is, sadly, what we are given here. There are two major problems here: the intonation of the orchestra and the conducting of Yakov Kreizberg.

Firstly, the orchestra; it must be noted that the Wiener Symphoniker can produce some wonderful sounds and discs (Strauss: Waltzes - Kreizberg is a good example) but this is not one of them. It is not so much that different sections have different ideas about tuning but that each player in the woodwind section seems to have their own idea of tuning with respect to each other - not something that I could live with on a long term basis.

Secondly, while Kreizberg is undeniably good and has given us great examples of his talent (Shostakovich: Symphonies 5 & 9 - Kreizberg or Dvorak: Symphony No. 8, The Wild Dove, The Noon Witch - Kreizberg stand out in my affections), Bruckner is a composer that he has not so readily taken to heart. Too often there are touches of micro-management that are blown out of all proportion into major distortions of the longer line - too much emphasis has been given to detail and not enough to the overall structure of the piece. Two better examples of how details can be successfully melded together are either Bruckner: Symphony No. 7 - Wand or Bruckner: Symphony No. 7 - Haitink.

The recording is outstanding and presents an appropriately glowing sound for this symphony but when one is accustomed to this, the glow is tarnished and the seduction of Pentatone's glorious sound quickly wears off.