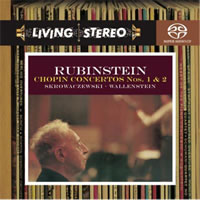 2015 Comment : since I wrote my review below for sa-cd.net, recordings of one or both of Chopin's concertos have proliferated on high resolution media. Of the current big name living pianists, we have Pires and two Argentines, Argerich [ twice for the E minor ] and Fliter. The latter is now with Linn records after being dumped by EMI during its prolonged death throes, despite Fliter's recording of arguably the most critically acclaimed waltz set, along with Hough's, since Rubinstein's 1960s classic. I haven't heard the Pires set. It's a Japan-only release from before her days of fame through her signing with DGG. I also haven't heard the young Korean Youn's set of concertos, though I'm impressed by his magnificently recorded SACD of Schubert impromptus. This reveals an unselfconscious musician with an impressive technique in the modern piano competition manner, who despite this delivers generally unforced interpretations, ones which remind me in some ways of the young Radu Lupu in this repertory.

Despite the dated sound, particularly for the orchestra, this Rubinstein SACD showcases marvellous playing, particularly in matters of rubato. For the first concerto he has to yield in all respects to the 18-year-old Pollini's astonishingly fresh and beautiful performance from 1960. This has yet to appear on high-resolution. For me, the Japan-only Argerich EMI/Warner SACD [ a typical late-1990s digital recording ] and Ingrid Fliter's new Linn SACD go to the top of the pack. With the easy availability of the Linn recording, also as a download, this currently seems to be the easy first choice for the concertos.

I had not heard either performance before, and it was enjoyable to listen for the first time to two obviously major interpretations. The only Rubinstein Chopin concerto I'd heard was his F minor dating to 1968; in all, he recorded this concerto 4 times in the studio, and there are live performances on record as well. This later performance is technically out of the 'Living Stereo' era, and all movements are slower and more laboured than the performance on the SACD.
All the Rubinstein concerto recordings I've heard have the soloist spotlit to a greater extent than is the norm, just as RCA did for the Heifetz concerto recordings. Hence, there is no way these will capture the balance of the concert hall. Additionally, the orchestral coda in the first movement of the F minor is truncated. The young Chopin didn't appear to be much interested in extended orchestral dissertations, but his perfunctory orchestral codas in both first movements descend into parody with the F minor, where the conductor is allowed a few chords of the tonic to round off matters, once maestro Rubinstein has concluded his deliberations. This cut is repeated in the 1968 performance of the F minor, but is present in no other non-Rubinstein performance I know of; I have no idea whether this is an old and corrupt edition he is using. There is also a great difference in sound quality. The First concerto, recorded 3 years later, is generally rich and full. The F minor, though still satisfactory, by comparison is rather papery with rolled off high frequencies, if one plays it immediately following on to the First, though the piano sounds relatively better than the orchestra, presumably by virtue of the close miking. This is despite Carnegie Hall being the venue. There are also faint, deep rumbles in the first two movements of this Second concerto. They don't sound like tape faults, and because of their persistence, are possibly due to air conditioning, though it is of a puzzingly deep pitch if this is so. It's not of sufficient volume to disturb the performance. Although I haven't heard the version of the F minor by Mr and Mrs Nagano on the Pentatone SACD, these are reasons not to dismiss the modern version.

The movement timings for the E minor are 19:41; 10:45; 10:03. These are roughly half a minute slower than Pollini's 1960 EMI version, which for me is the finest E minor performance. If Sony were ever to issue more SACDs, Gilels' lovely 1965 version would be a strong contender for pole position on SACD, but as this won't happen, there is no real reason to hesitate over this Rubinstein. Rubinstein and Pollini have similar conceptions of these works, and one feels if the former retained the digital dexterity of the 18 year old Pollini, his performance would be nearly as fleet. Both feature beautiful use of rubato, where the tempo is distended, without being self consciously distorted, and the right hand line is so superbly inflected that the ornaments appear as an integral part of the melodic line, rather than tacked-on decoration. However, the accompanist for Pollini, Kletzki, produces far superior orchestral tutti, which have ebb, climax and flow, to a greater degree than the rather pedestrian ones for Rubinstein.( This being said, the accompaniments here for Rubinstein are far better than the ones Zubin Mehta inflicted on Perahia, which at times make me wonder why CBS didn't engage the late British PM Ted Heath instead.) However, the conductors are not entirely to blame, because the over-prominent solo spotlighting, while allowing most pianistic nuances to register, does not allow the give and take in the music. By contrast, the balance between piano and orchestra in the Pollini version, together with the generally more distant recording, creates the impression of music being sculpted out of the silence, and Pollini's dovetailing of his phrases into the orchestral texture where appropriate, reinforces this. Both Pollini and Rubinstein can play rapid passage work without the sound becoming either louder or self consciously glitzy, which in my opinion was a drawback in parts of Argerich's 1998 EMI recording. As I haven't heard earlier incarnations of the Rubinstein performances, I cannot comment on the degree of sonic rejuvenation on the SACD. The opening unison chords of the piano in the first movement are satisfyingly full, though comparison to the CD versions of the Pollini and Gilels suggest a slight reduction in the bass of the piano compared to the treble. ( This is evident to a greater degree in the more limited sound of the F minor concerto.) Despite this, there is a glowing beauty to Rubinstein's piano tone above the bass, which wasn't that easily evident on the CD versions previously; indeed, the piano tone of the SACD is far more beautiful than that on even the 1998 Argerich on CD. If one were to state the advantages of SACD over CD to a pianist nonaudiophile, one could say that the higher reaches of the concert grand on SACD are lustrous by way of harmonic richness, rather than merely glittery, a fine aural varnish where one can hear depth and shine concurrently, and even the 'old' 1961 recording is able to show this.
Although Pollini's technique is more agile, this is not to disparage Rubinstein. Both show remarkable structural command. This is what makes Rubinstein's performances of both concerti so commanding. If one chops up either concerto into 2 or 3 minute segments, many pianists can appear to match Rubinstein. Listening to both works in toto, one is left with the impression of excellent technique, but an almost incomparable musicianship, because the parts fuse into a greater whole, the way Richter in his quite different way was also able to alchemise. The wonder is that Pollini age 18 possessed the same structural insight, and a conductor able to get better results on the day. Gilels had the same qualities, but his E minor is differently conceived to Pollini and Rubinstein. The playing of Gilels is more expressive, even fraught, along the lines of a deep philosophical probing where Pollini's quicksilveriness has been abolished as frivolity. This leads one to query some of the flash Harrys of the current era. Kissin recorded these concerti aged 14 or so, but they aren't memorable in the same way as Pollini, but remarkable the way a barely pubescent ex-Soviet bloc gymnast is. Even though Lang Lang & Li, the pianistic Siegfried and Roy of the biggest Roaring Tiger going, are both over 18, I wonder whether either can come close to Pollini, Rubinstein or Gilels.
Rubinstein's F minor evinces equally great musicianship, technically more adept than his 1968 version. His execution of ornaments and passagework is fractionally more ebullient and dextrous than it is in the E minor recorded 3 years later. The more limited sound though, has desiccated more of the piano bass, leading to sections where, with the spotlit piano, Rubinstein's right hand passages in concert with the orchestra, blur or submerge his left hand passages . Nonetheless, a welcome release. 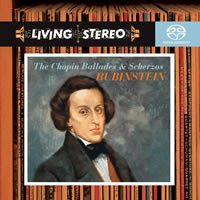 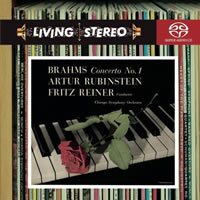 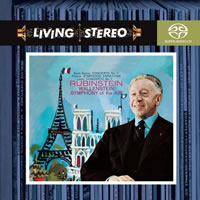 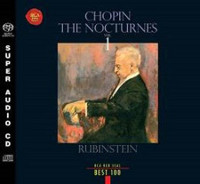 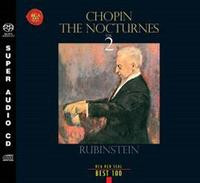