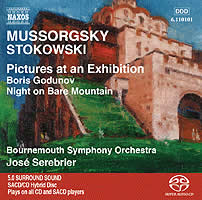 
Leopold Stokowski was not only one of the twentieth century’s greatest conductors, he was also an inveterate transcriber of music for the symphony orchestra, making some two hundred orchestral arrangements of works which had started life in other forms. During Stokowski’s lifetime, his orchestral transcriptions were, for the most part, only heard when he himself conducted them. In the years following his death, however, other conductors have increasingly taken an interest in performing his colourful arrangements. When the Leopold Stokowski Society was formed in 1979, one of its chief aims was to encourage performances of the Maestro’s transcriptions. In 2003 its Committee decided to approach José Serebrier with the suggestion that he too should take them into his repertoire, and record them. At the start of the sessions, which we attended, Serebrier told the Bournemouth Symphony Orchestra that he was not intent on copying Stokowski’s own recordings of these pieces but instead wished to approach them from a fresh perspective. – The Leopold Stokowski Society

Serebrier’s performances, and the Naxos recording, put the almost identical programme by Matthias Bamert on Chandos RBCD in the shade.

Deep bells, crashing tam-tams and col legno string effects all make a tremendous impact from the opening of Night on a Bare Mountain to the end of Pictures at an Exhibition.

Serebrier told the Bournemouth SO that he was not intent on copying Stokowski’s own recordings of these pieces but wished to approach them from a fresh perspective. This is exactly what he has done and I think that the results are electrifying.

Stokowski’s orchestration of Pictures at an Exhibition will never overtake in popularity that done by Ravel, not least because Stokowski omits two movements of the original (Tuileries and The Market place at Limoges) as being possibly too French, but it has a character of its own and I can’t imagine it being better done than here.

The transcriptions of the two Tchaikovsky pieces and Stokowski’s own Traditional Christmas Slavic Music complete a most enjoyable programme.

The recording is rich, but clear, with plenty of ambient information from the rear channels. I found the sound to be cleaner than that on the Naxos Bartok/Marin Alsop SACD recorded in the same venue.

Like the alternative disc, A Night on Bare Mountain opens the work. In the notes (unusually good for Naxos - presumably because Serebrier himself wrote them), it is claimed that Stokowski tried to marry the material the Rimsky-Korsakov used in his famous version with Mussorgsky's style of orchestration. I agree (in general) that the structure owes much to R-K but it is a little fanciful to concur with the second part of the claim! It is however very interesting if not supplanting either of the more traditional orchestrations. Stokowski's treatment of the Entr'acte to Act IV of Khovanshchina is altogether more stylistic - at no time does the orchestration distract from the desolate and depressing mood of Mussorgsky's horrifying composition.

The second major piece on this generously filled disc (nearly 77 minutes) is Stokowski's Symphonic Synthesis of Boris Godunov; the synthesis was composed for similar reasons to Liszt's operatic transcriptions - bringing great music to people who wouldn't otherwise sit through or be able to hear an entire opera (especially one in Russian). It is truly of comparison with Liszt's efforts, if not better than them as they (by remaining orchestral and only losing the voices) remain more faithful to the original conceptions. All the major parts of the opera are represented and dramatically realised by both Stokowski and the BSO under Serebrier - the BSO sound so different to when they were forced to play the excreable Christmas disc under Breiner; as well they might!

We then come to the main work, Stokowski's orchestration of Pictures at an Exhibition - which, despite the magician's best efforts, ironically sounds more French here than on the companion disc of Ravel's orchestration at times! Throughout the BSO play very well under Serebrier - although, here the playing is not of the same quality that Knussen managed with the Cleveland SO on DG (RBCD only). Some pictures are slightly lacking in verve due to the complex orchestration that makes it very hard to render at speeds that Ravel's version permits (especially the Ballet - track 10).

To end, we are given three small pieces (two from Tchaikovsky, one of Stokowski's own) which are, in common with all pieces on this disc, played with character and grace.

The recording is very different to its companion with a great deal more sound from the rears (a little too much for my liking but not particularly distracting) and altogether less dry. Recommended in addition to the "straight" Mussorgsky companion.