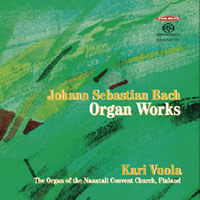 This very well-filled disc (78:59) holds a very attractive Bach programme from Kari Vuola. It features three of the more spectacular works from Bach's employments in Weimar and Cöthen: (Toccata in C, BWV 564), Fantasia and Fugue in G minor (BWV 542), Toccata and Fugue in D minor ('The Dorian', BWV 538). These stalwarts alternate with two of the more relaxed Trio Sonatas from Bach's Leipzig period.

The organ is relatively new, built in 1990 by Kangasalan Urkurakentamo in the Dutch Baroque tradition. It has 36 stops with tracker action and is tuned to Neihard's 1729 temperament "For a Small Town" - not quite equal tempered, which leads to some piquancy in certain chords. The host building is a beautiful church (1443-1463) in Nantaali (southwestern Finland), all that remains of a Bridgittine Convent. The stone building provides a responsive acoustic space which is beautifully captured in the recording. The listener is located around 1/3 to 1/2 way down the nave, and Mika Koivusalo, the recording, editing and mastering engineer, has used HD PCM to produce a sound that is both beautiful and impressive, reflecting his experience as an organ player himself. The 5.0 multichannel presentation has a wide dynamic range and a real sense of presence in the ancient building, and the stereo version is also most convincing.

Thankfully, Kari Vuola is not of the Romantic "take no prisoners" persuasion in his Bach interpretations. His registrations are based on blending related timbres and registers, providing a well-balanced and very transparent mix of sound without the constant use of the organ's full force. Quiet music with sweet solo stops is mellifluous and seductive, but majesty and impressive weight can build up very satisfyingly in the climaxes of the toccatas and fugues. For example, in the great "Dorian" fugue (note this is not the more famous one, BWV 565), Vuola increases tension and volume by gradually adding layers of related stops, notably in the pedals, where the 16' Pausane (trombone) is brought in towards the end, together with the 8' and 4' trumpets, making a resplendent ending.

My favourite version of the wonderful Trio Sonatas is Ton Koopman's on Archiv RBCD, a most cheerful and vibrant reading. In the E flat major BWV 525 he is over a minute faster than Vuola in each of the movements, and his outer movements positively sparkle with energy and sense of dance (partly because of some staccato and detached notes as well as added ornamentation - very baroque in style). Vuola, on the other hand, is more conservative and mellifluous in his registration of gentler solo stops and legato finger-work, exploring the subtleties of the movements with closely entwining lines and moderate flowing tempi. There is less difference between the two interpretations as far as speeds go in the D minor Trio Sonata, but Koopman is still the more ebullient and makes more decorations. There were times that I would have liked a little more Koopman-type buoyancy in the rhythms from Vuola in both the Trio Sonatas and the other works, .

Alba's booklet has notes on the music by Vuola himself in English, Finnish and German which are helpful, direct and in a very readable type-size. There is not only a full list of stops in each organ department, but also lists of the registrations used in each piece.

A fine recital for those who prefer their Bach to be both transparent in sound and deeply considered in performance, played on a lovely instrument in a responsive building and rendered in impeccable sound.