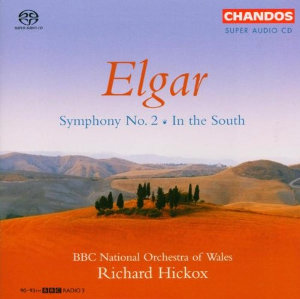 These are outstanding performances and recordings of two of Elgar’s greatest works and represent, I believe, only the second Chandos SACD to be recorded in DSD.

In an interesting interview in BBC Music magazine (August 2005) Richard Hickox talks about his desire to record this symphony and gives insights into the recording sessions.
He says “ I’ve just done the Elgar 2 on tour with the BBC National Orchestra of Wales so the piece is really in our blood; that’s the best way to make recordings. I think both live and studio recordings are fine, but when a studio recording can follow live performances nothing can beat it”

The disc begins with the Concert Overture ‘In the South’ and one is immediately aware of the rich, full-bodied sound and particularly smooth strings, quite unlike that on many Chandos recordings made in churches that sometimes seem to impart a shrillness to upper strings.

The acoustic of the Brangwyn Hall, Swansea, which Hickox thinks is one of the best recording acoustics in Great Britain - “ It’s shoebox shaped, plenty of wood and lots of natural reverberation”- is well captured, although I felt that the rear ambience channels seem almost too discrete. The performance is full of lovely things such as the viola solo in the central section and at an overall 22.04 is more spacious than some, but does not lack any forward thrust.

Hickox’s timing for the symphony (55.09) seems perfect to me and avoids the extremes of two of the RBCD versions, the ludicrously fast Solti (Decca) or the almost static Bryden Thomson (also Chandos) .

The first movement (Allegro vivace e nobilimente) begins at quite a rapid pace but never sounds rushed, just full of impetuosity. The sombre slow movement never drags and builds inexorably to a wonderful climax (very clear timpani) while the Scherzo is swift, incisive and light with a terrifying central section (impressive battering percussion).

About the orchestral layout Hickox says “ We had the layout as Elgar would have had it, dividing the first and second violins, which is important for all those answering phrases”. This is particularly noticeable in the finale, which brings this performance to a satisfying conclusion. Hickox does not include the optional organ part here, unlike Handley and Mackerras on RBCD.

Apparently the work was recorded in long takes, a movement at a time, and this really does seem to make a difference here.
Hickox again: “I’ve always gone for long takes because you start from the premise that you are going to give a complete performance. It’s exhausting for the players because often we’ll do a complete movement three times in a row but it pays off because they are performing and really go for it.”

One VERY important point. The disc is recorded at a low level and I had to increase the volume by as much as 10dB from my normal listening volume in order to achieve the superb sound on it.

This is a fantastic SACD which I find myself playing again and again, very realistically recorded with great detail but no audible multi-miking effects that are all too prevalent on DGG recordings.

The overture (ITS) gets a very dramatic reading with tempi similar to Elgar's own reading except in the hauntingly beautiful viola solo section (who shamefully is not named) where it is played much more sensitively and tenderly than normal. This causes the overall timing to be about 2 minutes longer than Elgar's account but the main vivace passages are broadly comparable. In this piece the contrasts are wonderfully realised and are neither over nor under-played by Hickox and the BBC NoW.

Moving on to the symphony, and one is again presented with a reading that is not as forceful in ramming home all the many delightful details present in this extraordinary score as some might wish for. Certainly compared to Sir Colin Davis' latest (and presumably last) recording on LSO Live, the Rondo third movement has a more muted central climax here and it could be, for many, a bit tame. The other movements (and indeed the remainder of the Rondo) fare much better with this less dramatic treatment.

In both pieces, there is a real virtuoso performance given with a wonderful rubato displayed that is completely at Elgar's service and in no way draws attention to itself. Based on these readings, I find myself longing for more Elgar from these forces (P&C, Enigma, Symphony 1, Gerontius, Sea Pictures) and other "lighter" music from the British Isles such as Arnold's dances, Londonderry Air (arr. Grainger amongst others).

The recording itself is a joy in all except one aspect. The sound is very well balanced and the amount of detail that registers is palpable without detracting from the overall thrust of the musical argument. The orchestra is captured very well and some of the resulting detail doubtless comes from the (sensible) decision to seat the violins opposite each other rather than the usual adjacent positioning. The only (slightly) irritating aspect to this disc is the very low recording level, which means one can be in severe danger of annoying one's family and neighbours if the volume control is not altered when moving on to the next disc. 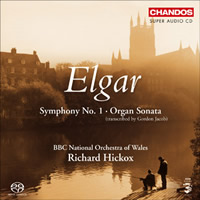 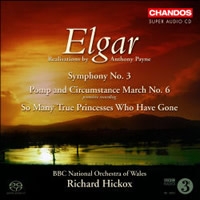