I think you are being optimistic John. Since Pentatone has moved to becoming an artist rather than a repertoire focused label they have also subtly moved from SACD to RBCD ...

Contrapunctus, Sanderling's Dresden Brahms cycle is absolutely spectacular. I think it's in the top 5 of Brahms cycles. 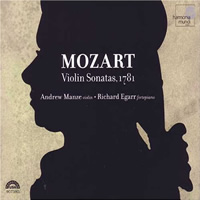 
Composed after he settled in Vienna, Mozart's Auernhammer" sonatas, K.376, 377 and 380, are the first fruits of his freedom from Salzburg serfdom and a sign of his new, revolutionary spirit. Multiple award-winners Andrew Manze (violin) and Richard Egarr (fortepiano) capture the sense of orchestral colour and concerto-style interplay which runs through these works. A rarely-heard fragment, K.403, is included as a delightful bonus.

Does anyone else around here hate listening to chamber or instrumental music recorded in churches when the miking so distant that ambiance swamps loud passages? If so, you can forget about this DSD recording. And maybe check other chamber music engineered by Brad Michel (he did the Tokyo SQ's Beethoven for example).

Tony, where was the Manze/Egarr Mozart violin sonatas recorded? I haven't heard it and therefore can't comment on the sound quality, but I do have several other SACDs engineered by Brad Michel. The Tokyo String Quartet Beethoven SACDs were recorded at Skywalker Sound in Marin County, California and the Academy of Arts and Letters in NYC. As much as I enjoy the Tokyo's performances, I don't like the sound of Skywalker in any of the albums I've heard that were recorded there. Richard Egarr Handel Organ Concertos Handel: Organ Concertos Op. 4 - Egarr, recorded in DSD at St.-Jude-on-the-Hill, London, has vividly realistic presence, with no loss of detail or excessive hall ambiance in the mix. Britten and Finzi song cycles with Mark Padmore, Britten and Finzi Song Cycles - Mark Padmore, recorded in DSD at Air Studios Lyndhurst Hall, is another outstanding chamber recording.

Apologies for my ignorant comment re Brad Michel's other recordings. His partial discography as producer and/or engineer (on his website) runs to hundreds of titles. Discogs shows 5 other recordings he did at the Doopsgezinde Kerk Haarlem (there are definitely others), all of them involving Richard Egarr, and all of them after this one. Altogether that 17th century Mennonite church has been used for hundreds of classical recordings, and it looks like a very nice recording venue. But I still prefer chamber music in a more intimate space, and the miking here negates any intimacy that might have been achieved. I assume the place was chosen by HM USA artistic director Robina G. Young in consultation with Manze and Egarr, and presumably they also specified the kind of sound they wanted. There's an interesting interview with Young here:

Thanks to Marcus for identifying the venue, and to Tony for the follow-up info. Here in Northern California, most classical chamber music performances take place in churches. In those venues, I enjoy sitting close to the performers; my preference in recordings is for a similar listening experience.