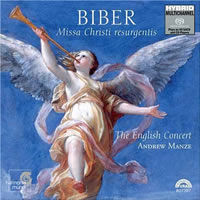 
This mass was written for Salzburg Cathedral, a jewel of the German Baroque. The work vied in refinement with the edifice itself, and was intended to immortalise the nobility and power of the prince-archbishops. Biber deploys all the musical rhetoric so typical of his art to bring out in his music the joy of the Easter festival.

Manze here used the Temple Church in London with a similar acoustic volume to that of Salzburg Cathedral, for which this Mass was intended. Musicians were arranged around the corners of a square, simulating the four pulpit areas of the Archbishop's cathedral, including the soloists and especially the 12 trumpets which the Archbishop had play fanfares for his entrances and exits. Heard in MC, this is a stunning experience, with the full acoustic spaced filled with sound so that none of the splendour and detail of the fine performances is lost. I would venture to say that this is one of the very finest surround productions in SACD or DVD-A; the imaging is very precise with musicians not just at the corners but also spread along all sides. Often, parts interact across diagonals, and this spatial separation gives the part-writing clarity and interest, not to mention impressive grandeur.

The recently re-discovered Resurrection Mass is interpolated with Biber's trumpet fanfares and also instrumental Sonatas, one of which is by Schmeltzer. Taken as a whole, it represents a celebratory service held in the presence of the powerful Archbishop of Saltzburg, and shows Biber's mastery of the polychoral style which originated in the great cathedral of San Marco in Venice. Manze's direction is buoyant, strongly rhythmic and full of dramatic contrasts, making a real sense of high occasion with his very experienced players and singers.

Don't miss this if you a well set up multi channel system. This is precisely the kind of music for which MC is so well suited. Give your rear speakers a holiday from playing ambience and celebrate with Biber!