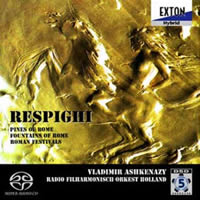 This is the only SA-CD so far to carry the whole of Respighi's Roman Trilogy and I was looking forward to hearing the whole as it is not often performed complete in concert. However, within seconds of the glittering (nay, glaring) opening of the Pines of Rome, I was disappointed, a feeling which deepened as I got further into the disc. This was not because of Ashkenazy's attempts at singing during the opening bars (grunt-watchers beware, but this was the only time I noticed his contribution). The main problem was with the recording, and this sent me off into a long process of making comparisons to try and find out what was going on. First impressions told me that the MC track was very bright and closely recorded, with little or no sound from the hall and only intermittently a hint of natural perspective. Far from my room walls vanishing, the whole orchestra seemed to be packed uncomfortably into a row between the front speakers. Even during the more atmospheric moments of the Catacombs portrayal, spot mikes would zoom the solo string desks and the woodwind forward; even the nightingales were close-miked, warbling up front between the speakers. Whereas, Respighi introduced a gramophone into the orchestra to make a special effect, and it is usually played from the rear of the band, so that distance can lend enchantment. No enchantment with Exton; the birds sounded quite nervous with the mikes up close.

The 5.0 recording also seemed bass-light; the double-basses could rarely be heard, nor the low 'cellos. The violin sound was thin and glaring at high pitches and crescendos, for which I began to blame the orchestra, which sounded distinctly third-rate at producing lush tone. The recordings were made in March 2004 and April 2005, and according to the label, used DSD. I wondered if there were any audible differences between the sessions. The Fountains of Rome had the same characteristics as the Pines, but the Roman Festivals were a different matter. Here the recording was still fairly close but there was very much more hall sound, and a better impression of front-back perspective; the orchestra was much better integrated and there was palpably more bass. At last I got a very exciting sound with thrilling brass choruses, deep organ pedals and a string section that sounded like a large group rather than a few violins playing right into a microphone. I concluded that either a different recording team was present for this session, or fewer microphones were used.

Coming back to the Pines and the Fountains which are the meat of this disc, I was so confounded by the recording that I found it difficult to relax and enjoy the music, which was a great pity. Comparing the Ashkenazy Pines with a version on DVD-A featuring Macal conducting the New Jersey Symphony orchestra, there was little difference in the overall approach of the two conductors, but the DVD-A (96K/24bit PCM) was much better balanced and tonally much more impressive. Respighi used a lot of "distant" and off-stage instruments in these pieces, and it is important to be able to localise these clearly, as usually can be done in the concert hall. I was able to do this with Macal - even when not watching the 5.1 DVD film of the performance.

Returning to the Exton disc, and keeping all the speaker and volume settings the same, I sampled the stereo SA-CD track, which although still bright and bass-light, clearly gave a better perspective of the orchestra as a whole and was easier to listen to, spot-zooming not being so obtrusive. To my astonishment, however, the redbook CD track sounded very good indeed - I would have been happy with it in my CD-only days and I thought it better than the SA-CD tracks. Mixing-mastering tweaks or problems might also be responsible for, in my view, the rather poor SA-CD sound.

Finally, not wishing to cast a slur on the Radio Filharmonich Orkest Holland and their hall, I turned to the Exton box of Rachmaninov orchestra works recorded by them in the same venue as the Respighi, and listened in MC to the earliest of those recordings, dating back to Dec 2001 (Symphony 2). Immediately, here was the real deal - an excellent orchestra with opulent tone and full bass, my speakers had vanished and the back-to-front perspective was clearly set out, with no knob-twiddling, zooming or panning. A real orchestra, and a very fine one at that.

My conclusion is that if you like very close, bright sound with a rather light bass and need the Roman Trilogy in MC, then buy this Exton if you must. Ashkenazy is fine, but you will get nothing like the thrill of hearing music by one of the 20th century's greatest orchestrators as you would get live in the concert hall. Otherwise, wait for Polyhymnia, MDG, Bis, Chandos or one of the other recording teams with engineers who know how to make the best of an orchestra and venue to produce their own Roman Trilogy.
Postcript: After posting this review, diw posted in the forum, alerting us that the centre channel on his disc was missing. I checked mine and although my Marantz player detected a centre channel, it was indeed silent. I have contacted JPC from whom I bought the disc and will update members on any progress, especially if Exton give any explanation.

Having written a very enthusiastic review of Ashkenazy’s other Exton Respighi disc Respighi: Church Windows etc. - Ashkenazy I was surprised find this one rather disappointing in terms of both performance and sound in spite of the fact that it was taped by the same engineers at the same sessions in March 2004 and April 2005. The problem here seems to be that the microphones have been placed too close to the orchestra so that too often the listener appears to be on the conductor’s podium!

Any half good conductor could turn in respectable performances of these works and Ashkenazy is more than that, but here he fails to challenge the many versions of Respighi’s Roman Trilogy already available on CD, to say nothing of the 1959 Living Stereo SACD of Pines and Fountains by Reiner and the Chicago Symphony.

The opening of the Pines is vigorous, but just taken a fraction too fast for perfect articulation and is not helped by the conductor’s grunting. The ‘distant’ trumpet solo in The Pines of the Janiculum sounds anything but distant while the nightingale at the end of this movement appears as if it is sitting on the top of the front speakers! Conversely the build up to the huge climax of the Pines of the Appian Way is too matter-of-fact, and the recording becomes congested, failing to allow the peroration to expand with maximum impact.

Ashkenazy seems impatient with the opening of the Fountains, so that the undulating string figurations and harmonics fail to conjure up the atmosphere of “ the fresh damp mists of a Roman dawn” and once again, the over-analytical recording spoils Respighi’s sound picture of a warm Italian evening with distant tolling bells for the Villa Medici fountain at Sunset.

Comparing Ashkenazy’s Feste Romane with the Decca recording by Lorin Maazel and the Cleveland orchestra (RBCD only) further emphasises the limitations of this SACD. Ashkenazy and his gallant Netherlands Radio Philharmonic Orchestra are just no match for the virtuoso orchestral playing of the Clevelanders and Maazel’s vice like grip on the piece. Maazel’s thrilling antiphonal trumpet groups in Circinses are both incisive and suitably distant whereas Askenazy’s emphasise the lack of depth of the recording venue. In Jubilee the solo mandolin is firmly placed in the left hand speaker sounding much louder than the accompanying strings while the opening of the final Epiphany begins at such a fast tempo that it eventually becomes a scramble for the players reducing the impact of the final accelerando.

In spite of some good moments, I cannot fully recommend this disc. The field is still wide open for an outstanding up-to-date recording of these pieces.

An unsatisfactory disc of some virtuoso music.

The disc starts with the Pines of Rome and one cannot help but hear Ashkenazy's commitment to creating an exciting opening. Sadly, the Radio Filharmonisch Orkest Holland cannot match the commitment with the technical aplomb nor musical finesse that transforms the work from an essay in orchestration to a voyage of sound. Throughout the quieter moments there is a serious lack of any "magic" in the phrasing and it makes one mystified for all the wrong reasons! The appearance of the nightingale is also anything but special and the build-up of the Appian Way has none of the superb pacing that makes great accounts so compelling.

Similar problems plague the Fountains of Rome, with a lack of atmosphere in the opening movement - it appears that the fountains were closed for cleaning when Ashkenazy mounted the podium here. Nor does the Roman Festival fare any better - the weakest of the three symphonic poems, it really needs a swagger that is fundamentally missing in the playing. More than that, there is some terrible ensemble in The Epiphany that closes the disc, so much so that it almost sounds like sight-reading.

At no point does this disc challenge any of the right acclaimed accounts that have found their way onto RCA's Living Stereo series or, my personal favourite, Karajan's magical accounts from Berlin.

A compensating factor could have been if the recording was extraordinary but sadly it is far from Exton's better efforts and must rank almost as disappointing as the music making. Recorded far too closely for such atmospheric music, the mirage of sound becomes all too congested and rather unlistenable upon repetition - it also denies the climaxes any sense of impact.

Such a shame, for this music cries out for reproduction via SACD.