These late 1970s recordings vastly benefit from the new EBS remastering. I'd like to draw attention to the new remix, which leads in turn to some remarkable changes regarding ... 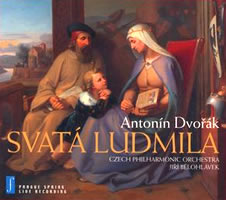 This is ArcoDiva's SA-CD début and a very promising début it is too. Recorded at the 2004 Prague Spring Festival, it presents the Czech Philharmonic in glowing colours ably directed if not spellbinding by Jirí Belohlávek. Irritatingly, the numbers 7, 16 (part one), 21, 22, 31 (part two), 40, 42, 43 (part three) are cut and with a playing time of about 50 minutes on the first disc and 63 minutes on the second there surely was room for these.

Saint Ludmila is in three parts; the first has some great opportunities for the chorus to shine as well as introducing to the main protagonists. Opening with hushed, murmuring tones the music expands into a male chorus (situated on the right from front to back) and immediately a tenor solo that welcomes Spring (from the rear left). The rest of the staging is conventional and the music contains many beautiful melodies which all concerned deliver to us with consistent beauty.

The second part is far more geared up to the soloists with the chorus having some rest in the early numbers. I find that the tone of the soloists is consistently bold without excessive vibrato but not strident. As this is a concert performance there are the odd raw moments from orchestra and soloists alike but nothing that should detract from any one's pleasure in any serious respect. The children's chorus is suitably angelic at the close of this section (and is balanced to hover behind your head).

The third part is the shortest and is mainly formed of duets but like the first part, opens with a choral number. As before the singing and playing is of a consistently high standard (if not lacking the odd minor blemish). The work draws to what at first seems to be a musically triumphant close before becoming increasingly humble and penitent.

Throughout the recording is beautiful with a pleasing sense of the acoustic present in the recording; all the various spacings are well balanced although I'm not sure how this worked in concert and have my doubts about whether it is entirely honest in terms of the presentation of the locations of the participants. The orchestral sound is ravishing and ideally clear when not covered by the chorus. At no point is the audience audible and for those to whom this matters, there is no applause left by the engineering team.

Recommended & I hope that ArcoDiva will grace my ears with more productions of this quality - if only they would record a Ma Vlast...

I visited concert on the Prague Spring Festival where it was recorded. This is Dvorak’s third oratorio and with St Ludmila he composed a great work.
First, SACD is well equipped- nice paper 2 SACD box with booklet with complete text of oratorio in Czech, English, German and French.
Prague Philharmonic Choir is the star of the recording together with Eva Urbanova as Ludmila, who sings almost incredibly and Bernarda Fink as Svatava. We can only be sorry there is so little to sing for Svata.
Peter Mikulas as Ivan sings nice, very soft and in pretty high standard, performance of Ales Briscein as a husbandman I would classified as “acceptable” but I’m disappointed with Stanislav Matis as Borivoj. He is the weakest part of this SACD, I think this occasion qualified for better tenor.
Conductor Jiri Belohlavek prepared Czech Philharmonic Orchestra very well, I’m not able to tell if all notes were there, where they should have been, but orchestra plays with all the sonic and harmonic transparency that the score asks for. You can feel all the greatness of this piece as well as nice pianissimos and during all performance orchestra accompanied soloists very attentively.
Technically it is well done SACD. It is not as clear as it could be (for example if I compare it with SFS’s Mahler recordings) but the standard is still high and sound is plastic. My opinion is that is because of Smetana Hall acoustic. In the end of the second part you will be surrounded by chorus of angels. Don’t be surprised- the famous children’s choir Bambini di Praga where placed in heaven- on the second circle, slightly on the right side- and you will hear it on your MC system!!
The recording is full of emotion and for sure after final chorus- Hospodine, pomiluj ny! / Mighty Lord, have mercy on us! -you will be thrilled
mc

The Czech Philharmonic is a world class ensemble and there is no need to have concerns about their technical prowess. This oratorio is unknown to me.

Other than Rusalka, Dvorak's operatic output of ten works has not survived mainly it is said because the Czech people have regarded his offerings as dramatically weak.