Thanks for your comments, Phillip. I'll play the disk for my wife to get her opinion. But I don't understand what John means by the "Egyptian". 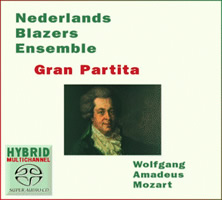 I came to this disc partly wanting to support an ensemble new to SACD and also because this has to be one of the most sublime pieces ever written by Mozart or for wind ensemble (plus a stray double bass!) Unfortunately, whilst the playing is technically top-notch with amazing co-ordination and virtuosity as well as consistently beautiful tone colours and blends, the sense of musicality that other groups have displayed (sadly not on SACD) is sometimes absent from this performance.

The notes are very interesting and talk a great deal about the character of the music and make reference to the manuscript used in the preparation of parts for this recording. Helpfully, some crucial excerpts are included (such as the conclusion of the finale) and these only serve to highlight some of the very loose interpretations of the manuscript that the NBE adopt. There is *no* accelerando marked in the score at the end of the finale but the NBE compete with each other to find out who can finish first! This is, perhaps, the most blatent example of the type of musicianship displayed but for me, this ruins not enhances the flow of the musical argument; it is exciting enough without this "extra" interpretative "insight". There are many felicitous touches but there are just too many occasions when the distortion of the line overrides any benefit that might have otherwise occurred.

The recording is nicely judged, not too distant but not too close and a pleasing sense of ambience from the superb church in which the concerts (from where this recording is derived) were given. The audience is admirably silent until the conclusion, after which whistling and applause rains down from all sides - the audience clearly were taken in & I wish I could have been too! The applause track is not separated and even for those who don't usually mind applause, might think that the audience reaction is, well, a bit over the top.