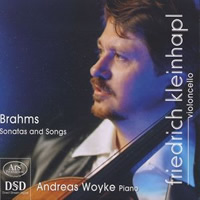 The Brahms Cello Sonatas were the most important of the genre to be composed after Beethoven and are amongst his most popular and most recorded works. Cellist Friedrich Kleinhapl and his permanent duo partner pianist Andreas Woyke here present the two original sonatas for cello (not transcribed viola or violin sonatas) and finish the disc with no less than six of Brahms' lieder, arranged for cello and piano by Kleinhapl himself.

There is, of course, a huge heap of RBCD recordings of these sonatas by legions of great cellists, but fewer than a handful of ones recorded in SACD. For direct, movement by movement comparisons, I chose the highly-regarded RBCD performance by Rostropovich & Serkin, together with Brahms: 2 Cello Sonatas - Kanka/Klansky. From the start it is clear that Kleinhapl and Woyke take a more urgent view of the music; their timings are almost consistently faster movement by movement, by over a minute in the short movements, and over two minutes in the long first movement of the E minor sonata. All repeats were performed in each case.

These generally faster speeds, to my mind, bring great rewards - but certainly not a sense of haste. The Kleinhapl & Woyke duo have clearly thought deeply about these works, especially their often unusual textures and structures, and in the case of the E minor sonata, the importance of Brahms' avowal of Bach's influence in its first and last (fugal) movements. Their playing has a tremendous sweep, which carries the listener irresistibly forward through to the final bars of each movement. Truly up-tempo finales give both players the chance to show off their sparkling and well-controlled virtuosity. The duo also scrupulously follow Brahms' meticulous dynamic and tempo markings; they both play true 'pianissimos' where marked and not generalised 'piano' as is often the case these days. They do not slow down markedly for more lyrical passages, as do the others in my comparison, nor do they spoil the basic pulse by heavy, loving rubatos.

Brahms' strenuous climaxes are often a stalling trap for chamber music players, but with Kleinhapl and Woyke these too are taken in their stride without unwritten rallentandos and emotional broadenings. This is not to say their interpretation is not expressive or lacking in drama; quite the opposite, as Kleinhapl's subtle variations of vibrato and tone colour and the duo's marvellous control of tension within the music are most eloquent. Woyke is more than just supportive of his cellist, he adds many beautifully expressive touches of his own. For example, his introduction of the sweet B major theme in the coda to the exposition of the first sonata is just magical, where the others compared being more prosaic.

Compared with the much more traditional and romantic versions of Rostropovich/Serkin and Kanka & Klansky (beautifully played and sincere though they may be), I found that Kleinhapl & Woyke were as fresh as Spring, their interpretations spontaneous as though flowing straight from Brahms' pen, cleansed of many Romantic and post-Romantic encumbrances.

The fill-up transcriptions of Brahms' songs is a clever programming idea. Kleinhapl has chosen some of Brahms' loveliest melodies, balm for the soul indeed and gorgeously played. They reminded me of how few Lieder recordings have yet made it to SACD.

The Ars engineers placed the cello left of centre, with most of the mid and upper tones of the piano towards the right, in the well-controlled acoustic of Helmut-List-Halle in Graz, Austria, discretely supported by the surround speakers in 5.1 multichannel. Kleinhapl's baroque cello by Giovanni Tononi (1681) is naturally balanced against the piano, compared with the highly resonant portrait of Michal Kanka's cello as recorded by Praga, which sounds like a big double-bass in its deep register. The Ars clean PCM sound is a match for these clean interpretations.

I look forward to auditioning more of Kleinhapl & Woyke's recordings, which, on the evidence of this one, deserve to be more widely known. In the case of the Brahms cello sonatas, they have accomplished an artistic renovation of some wonderful Old Masters, revealing the music's exuberance, spirit, gruff wit and colours as if new-minted.