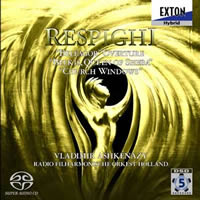 The sound quality on this 5(4?).0 channel SACD is absolutely stunning. I doubt that Respighi’s exotic orchestral palette and massive dynamics have ever been captured on disc as vividly and unflinchingly as here.

The lively overture to the opera Belfagor is a kind of demonic scherzo with a more lyrical central section. It teems with inventive ideas and is brilliantly played making a perfect introduction to the rest of the programme.

The four-movement suite from Belkis, Queen of Sheba, is performed in the order found on the very fine HDCD Reference Recording by Eiji Oue and the Minnesota Orchestra (RBCD only). Geoffrey Simon and the Philharmonia Orchestra on his Chandos recording reversed the order of the two central movements producing a slow – fast – slow – fast sequence that perhaps provides better contrast. Ashkenazy, however, retains the published sequence of the suite and gives a more taut and exciting performance than Oue, while the fine players of the Netherlands Radio Philharmonic Orchestra revel in their virtuosic solos. It makes one wonder what the full 80-minute ballet, successfully staged in 1932 at La Scala Milan, would sound like. It required an enormous orchestra including sitars, wind machines, a phalanx of off-stage brass, a chorus, several vocal soloists and a narrator!

Church Windows (Vetrate di Chiesa), with its use of Gregorian melodies, has been recorded a number of times in the past, notably on LP by Antal Dorati and the Minneapolis SO in a Mercury (mono) recording that sorely tested a pick-up’s tracking ability with the tam-tam crash at the end of the third movement! Here the DSD recording reproduces it cleanly with overwhelming impact and the sound is allowed to die away to silence for a full 20 seconds. Magnificent!
In the other three movements Ashkenazy and the orchestra relish Respighi’s ‘Technicolor’ orchestrations to the full. The swirling wind figurations and beautifully balanced solos by oboe, clarinet and horn in ‘The Flight into Egypt’, the hushed strings and distant chimes in ‘The Matins of St Clare’ and the almost overwhelming brass and organ climax to ‘St. Gregory the Great’ bear witness to the success achieved by the Exton sound engineers.

Rear channels in the MC mix are used purely to re-create the ambience of the Radio Philharmonic studio in Hilversum.

This disc further increases the number of Respighi’s works available on SACD and fully deserves top ratings for both performance and sound as well imaginative programming.