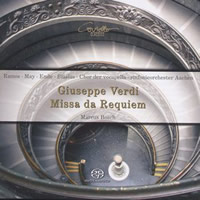 The South German city of Aachen was the power-base of the Holy Roman Emperor Charlemagne, who completed his magnificent Byzantine palace and chapel there around 800AD. The royal chapel, with additions in the Romanesque and Gothic styles, is all that remains of that palace, and is now the Roman Catholic Cathedral of Aachen. Together with its Treasury, full of gold and silver works of art, it is now a World Heritage Site. It was in this cathedral that Coviello recorded their glowing account of Verdi's Requiem.

Aachen's Symphony Orchestra is one of Germany's oldest Municipal Orchestras. It nurtured conductors like Fritz Busch, Herbert von Karajan and Wolfgang Sawallisch by giving them their first employments, and they each left their stamp on the orchestra. Marcus Bosch has been its General Music Director since 2002. Bosch also founded the vocapella chorus in 1990, and it now performs frequently with the Aachen orchestra.

This Verdi Requiem, captured live in Feb 2005, is on one disc running at 77:13, whereas Harnoncourt's Vienna performance is split onto two discs, and totals 87:43. This is implies quite a difference in pacing, but should not indicate that the Bosch ever feels rushed. Instead, its forward sweep seems inevitable. The fast Dies Irae sections are absolutely terrifying, and the senses of both of urgency and repose are fully dictated by the Latin texts. Take the Sanctus as an example: where Harnoncourt is jaunty and precious-sounding, Bosch is joyfully urgent and almost Mendelssohnian, conveying a true lightness of spirit. With Bosch the episodic Requiem rubric becomes a unified drama, forming an arched structure from the softest opening threads of sound to the final dying mutters of 'Libera me'. There is little doubt that the splendour of Charlemagne's Royal Chapel, smaller and more intimate than many Gothic cathedrals, put the Aachen players and singers on their mettle.

The Coviello engineers have done a very fine job. The 5.0 MC stage is both wide and deep, and one is enveloped by the warm, sympathetic acoustic, which does not cloud details but allows climaxes to expand without distracting echoes. Violins are tellingly divided left and right, and the orchestral solos are in correct perspective. This is one of those realistic recordings, which when played louder, simply sounds more thrilling. The RCA Victor balance for Harnoncourt, also live in the Vienna Musikverein, is fine in the quieter sections but comes forward into a wall of sound when at high volume. I also found I could not live with the lacerating Vienna piccolo, which is far too dominant with its shrieking trills in the Dies Irae sections, balanced to almost drown out the chorus and pin one back into the chair. At Aachen the complex orchestral textures of the Dies Irae are natural, with the chorus's words dominant and the piccolo in its place. The soloists too, are set back somewhat, without the forward spot-miking in Harnoncourt's mix, which makes the soloists too 'large' against the span of the orchestra. The Aachen bass drum thwacks sound apocalyptic at Bosch's fiery pace, and after these eruptions of sheer terror, the succeeding verses of the Sequence are all the more effective in their calmer lyricism.

Thankfully the audience are mercifully quiet; I noted a modest cough in the Liber scriptus and a couple of quieter one later on; these were not really distracting, and served to demonstrate the realistic qualty of the MC soundstage, as they could be located in 3D space with some precision!

There seems to be a widespread misconception about the disposition of the brass instruments in Verdi's setting of 'Tuba mirum', the so-called Last Trump. It was Berlioz who specified four extra brass bands at the four corners of the church during this section, not Verdi. Writing 37 years later, Verdi clearly did not want to copy the inspired Berlioz arrangement, and in the score he clearly indicates 4 trumpets and other brass 'in the orchestra', with 4 other trumpets 'in lontananza ed indivisibili', meaning a distant grouping. Where the off-stage trumpet quartet are placed is a matter for convenience and best effect in a given venue. In Aachen, the trumpets sound from a gallery seemingly high up, very atmospherically. At Vienna, as noted by Polly Nomial (Verdi: Messa da Requiem - Harnoncourt), who was present at one of the live performances, the off-stage trumpets were not at the back of the hall, but were placed in the rear speakers when the MC mix was produced.

Many reviewers have uttered reservations about Harnoncourt's soloists. In my view, Bosch has the better and more committed group. The delightfully named soprano Melba Ramos sings sweetly and with deep feeling; she has a greater dramatic presence and range in the Libera me than Eva Mei, and her voice doesn't harden at the top. Alto Gabriele May has a more natural tone-colour than the rather matronly and somewhat wobbly Bernada Fink. Tenor Michael Ende is far more idiomatic than his Vienna counterpart and lets his voice soar thrillingly into the chapel acoustic (a glorious Ingemisco). Bass Martin Blasius has a richer and darker sound than the dry-toned Ildebrando d'Archangelo - his bitterness in Mors stupebit is chilling, and in the Requiem aeternam he is implacable. The most important feature about the Aachen solo quartet is that their voices blend well and they have excellent ensemble rapport in Verdi's many duets. In the Agnus dei, the female soloists float their lovely melody exquisitely into the receptive chapel space, with beautifully inflected flute solos to carry them aloft, and this makes an impression that sings in one's mind for days.

Vocacapella have been superbly prepared for this Verdi Requiem. Their diction is excellent, but more than almost any other choir I have heard in this work, they are fully alive to the poetry of the texts, as as are the soloists. They respond with touching word painting and many tone colours. Bosch, more than some other conductors, makes real dramatic sense of the shattering outbursts of 'Dies irae' which occur throughout the Requiem. Verdi seems to want us to remind us that death can take us, the mourners at his Requiem, at any time. They are orchestrated differently at each outburst, and each time Bosch draws out those differences, they choir highlighting them particularly.

I made pages of notes while comparing the Bosch reading with Harnoncourt's, which I find to be very much a concert performance. For me, it will now be the Aachen team's recording that goes into my player. It is they who most make me realise Verdi's deeply personal sense of mourning for Italy's beloved poet and humanist Alessandro Manzoni, whom he had met in 1868.