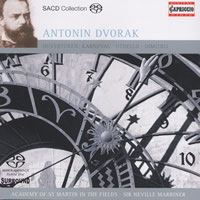 This is another of those odd Capriccio mid-price releases whose booklet cover tells only half the story.

The ASMF under Marriner perform just the first two pieces (Carnival and Othello Overtures), recorded in St. Jude’s Church, London in 1990, while the other two (The Water Goblin and Dimitri Overture) are played by the Berlin Radio Symphony Orchestra conducted by one Hans E Zimmer (not the well-known film music composer!) and recorded in 1996.

Marriner gives efficiently played, but rather bland and unexciting performances of the two overtures; a far cry from say Kubelik or Ancerl in this repertoire.

The Water Goblin and the rarely heard overture to the opera Dimitri fare somewhat better under Zimmer, but what really lets this SACD down is the unspectacular quality of the recording. It is clear, with a good spread, but has little depth, while strings throughout have a rather shrill quality. A lack of bass is also a drawback, most noticeable in the Water Goblin. The rear channels are almost inaudible and add nothing to the overall sound. They were, I imagine, artificially created. Many a budget RBCD has equally good or even better sound than what is on offer here.

The booklet notes have been badly proofed and only discuss two of the four works on the disc.
Even at mid-price, 52 minutes is short measure for such routine performances, particularly as the items conducted by Zimmer are taken from a 2-disc set on RBCD that also included the Slavonic Dances and Scherzo Capriccioso.