Universal Japan released the '80s recording Grieg/Peer Gynt/Karajan that I mentioned in my first comment (UCGG-9068, re-issued as UCGG-9505). They also did ... 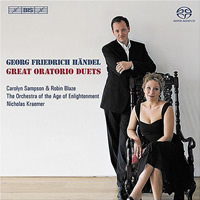 
Pure delight: two of Britain’s most exciting singers together with one of the most vibrant of the English period bands, in a collection of wonderful duets from Händel’s English oratorios and odes. Both Carolyn Sampson and Robin Blaze collaborate with Masaaki Suzuki in his recordings of Bach Cantatas, for which they are receiving high praise. ‘Sampson's rounded, lyrical, glowing tone is just what I want to hear in the warm-hearted soprano cantata O holder Tag’ said the critic in International Record Review about BIS-CD-1411, whereas The Times, UK, has described Robin Blaze as being ‘blessed with a most alluring countertenor – creamy in tone, naturally expressive, exquisitely controlled…’.

These qualities certainly all come to the fore in this selection of duets which, while mainly gathered from religious works, focus on that general subject of interest: Love. Love between husband and wife, between Kings and Queens, between lovers, between conqueror and vanquished. In the course of this string of melodious pearls flow streams of pleasure, great victors are greeted and freedom smiles – all depicted with wonderful charm and feeling by Sampson, Blaze and The Orchestra of the Age of Enlightenment conducted by Nicholas Kraemer.

A gorgeous disc of singing, playing & conducting of highlights of some of the greatest oratorio's ever written. The music included on this 70 minute disc is [title (work)]:
"These labours past" (Jeptha)
"Oh peerless maid" & "Our limpid streams" (Joshua)
"Great victor, at your feet I bow" (Belshazzer)
"When thou art nigh" & "To my chaste Susanna's praise" (Susanna)
"To thee, thou glorious son of worth" & "Streams of pleasure ever flowing" (Theodora)
"Welcome as the dawn of the day" & "Ev'ry joy wisdom knows" (Solomon)
"Kind Health descends" (Eternal Source of Light Devine or Ode for the birthday of Queen Anne)
"O fairest of ten thousand fair" & "At persecution I can laugh" (Saul)
"Where do thy ardours raise met" & "Smiling freedom, lovely guest" (Deborah)
"Hail wedded love" (Alexander Balus)
"Let's imitate her notes above" (Alexander's Feast or The Power of Musick)
"Who calls my parting soul" (Esther)

As can be seen from the list above, this is a fairly good cross-section of Handel's great works and, in duet form at least, has remarkably little competition (Handel: Saul - Jacobs is the most obvious here). The most(?) famous duet that Handel wrote for this combination of voices (soprano & counter-tenor) that is missing is "He shall feed his flock" from Messiah, which is a shame as there is certainly room on the disc to include this duet.

Throughout, in both celebratory and sorrowful music, Carolyn Sampson & Robin Blaze sing with aching and tender beauty. Added to which, Nicholas Kraemer coaxes marvellous sounds from, what is arguably Britain's top period instrument ensemble, the Orchestra of the Age of Enlightenment. Comparing them to their counterparts (Rosemary Joshua, Lawrence Zazzo, Concerto Koln, Rene Jacobs) in the short but wonderful duets from Saul, then we see a more reflective interpretation here which works just as well as the more upbeat take from Jacobs' team; the presentation is more concert-hall than the theatrical approach of the Harmonia Mundi recording but as this essentially a concert, rather reflecting a staging I don't have a problem with this. The useful notes place each duet in the narrative of the respective oratorio and texts (in English only) are provided as well.

The sound provided by BIS is the usual model of clarity and unaltered dynamic levels that I have come to expect and enjoy. The two voices are clearly placed and there is good imaging of the orchestra too, which sounds just as it would "in the flesh".

Very enjoyable & most relaxing after a hectic day or week - this really is music that transports one into a calmer place. 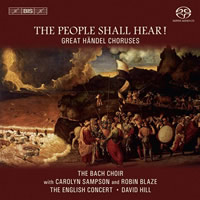