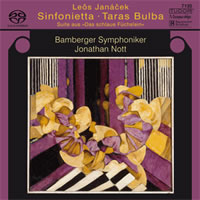 I had been looking forward to this first release of two of Janaceck’s greatest orchestral works on SACD but unfortunately the competition on CD in these pieces from such conductors as Rafael Kubelik, Karel Ancerl and Charles Mackerras is intense and as Voltaire said ‘the best is the enemy of the good’
Jonathan Nott’s performances of all three works are certainly good, with generally well-chosen tempi and a responsive orchestra.

The Suite from the Cunning Little Vixen is not the familiar two-movement version, made by Talich in 1937 to popularise the opera, but the earlier one made by Frantisek Jilek. Talich’s suite is mainly an orchestral transcription of the first act of the opera while Jilek’s also uses music from Acts 2 and 3 and assigns some of the vocal lines to instruments. It is, in some respects, a more effective snapshot of the opera, and is played and recorded most vividly here. For me this was the most successful item on the disc.

It is when we come to the two main works that some reservations creep in.

The Sinfonietta with its 11 trumpets should make greater impression than it does here. I find the playing to be dutiful and routine rather than electrifying, and, in the central three movements, the smooth Bamberg strings and rich, fat brass that can sound so wonderful in Bruckner or Wagner appear un-idiomatic here. Surely a leaner more earthy sound is required for Janacek’s unique orchestral textures?

Taras Bulba is given a smooth, if rather low voltage performance, and some of the percussion detail audible in other versions is submerged in the plush upholstered sound. However the important organ does make its presence felt at the appropriate moments in the first and third sections of the work.

Although this recording was made in the usual venue of the Josef-Keilberth-Saal, Bamberg it has a quite different balance from either Nott’s Mahler 5 or Bruckner 3 recordings both of which I have enjoyed greatly. This time we are placed close to the orchestra and the sound stage, though quite wide, does not appear to have as much depth. Nor is the ambience of the venue, captured by the surround channels, as apparent.

Anyone coming new to this music would find much to enjoy and little to complain about in this SACD but I am sorry to say that overall I am rather under-whelmed by it.

A largely wonderful disc which has some frustrating aspects.

Unfortunately for us, the most obvious of these frustrations opens the disc - the magnificent opening to Janacek's Sinfonietta. The trumpets are restrained far too much, although this is clearly intentional because in the reprise of this momentous fanfare at the end of the work, there is far more attack applied by these brass players. Jonathan Nott has purposefully underplayed this moment which has benefits when it gets to the recap of the fanfare but it could and should be overwhelming from the start. The rest is very well played though and features fine contributions from the strings and brass; the oboes are a little too polite and restrained however, they could have done with projecting their (admittedly beautiful) tone more to prevent being nearly drowned out by accompanying string figurations. The pacing is good and brings a good sense of drama to the work and leads me to find despite these reservations that this is very exciting playing even though this is largely because of Janacek's music not the interpretation driving this feeling. There are many subtleties displayed from the orchestra even if some of the tone is a little more rounded than some who are used to the Czech PO might expect.

Taras Bulba is completely successful and does not suffer from any of the problems that I felt the Sinfonietta has at times. Likewise the suite from The Cunning Little Vixen is very well played and characterised and rounds off this very enjoyable disc in a beautiful way. The Bamberger Symphoniker play with verve and a real sense of style for the most part. There are times when one misses the more plangent tones of central eastern European orchestras but this is a very good disc until a disc emerges from these parts (would the Budapest Festival Orchestra excite anyone?)

The sound is very good with all details coming through in an entirely natural manner; the smoothness of the sound is a combination of the acoustic, orchestra and recording and occasionally blurs edges that should be rougher.