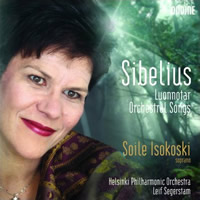 
This hybrid SACD features the Finnish star soprano Soile Isokoski with her first all-Sibelius recording of works for voice and orchestra, including the tone poem Luonnotar and eighteen of Sibelius's orchestral songs. Luonnotar (Daughter of Nature), completed in 1913, is a powerful tone poem for soprano and orchestra. Based on an excerpt from the Finnish national epic Kalevala, the song tells of the mythical creation of the earth and the sky. Performed in their original language (Swedish, Finnish), this recording contains almost all the songs of Sibelius that were orchestrated by the composer himself (the only missing song being out of Ms. Isokoski's vocal range). Almost all the other songs featured on this recording were orchestrated by Jussi Jalas, Sibelius's son-in-law, (tracks 1, 7, 10, 14-16, 18) or by his close contemporaries Ernest Pingoud (3), Ivar Hellman (4) and Nils-Eric Fougstedt (8).

A superlative disc. Firstly, the music is marvellous and whilst Luonnotar will be familiar to many listeners, the orchestral songs contain comparative rarities. Just over half the songs on the disc have orchestral arrangements provided by friends or contempories of Sibelius.

Opening with one of the arranged songs "Kaiutar" [The Echo-Nymph], the textures are beautiful and Soile Isokoski, the Helsinki Philharmonic and Leif Segerstam acquit themselves marvellously although it has to be said that this is probably not quite what Sibelius would have chosen himself. It is quite upstaged by the gem of the disc, Luonnotar [The Nature-Spirit], in which the magical Sibelian landscape is powerfully evoked by all concerned.

The remaining songs are comparatively brief, ranging as they do from under a minute ("Laste lainehilla" [Driftwood]) to just over five minutes ("Under strandens granar" [Under the Fir Trees on the Shore]). Although this programme could quite easily allow itself to become fragmentary in nature, the choice and ordering of songs is chosen well so that the emotional content is satisfyingly varied. To

The 5.0 recording from Ondine is lovely and airy with a pleasing sense of resonance but at no point clouds the details in the music. The microphones are perfectly placed so that no breathiness in Isokoski's voice is captured.