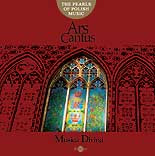 Tired of seemingly endless issues from complete symphony cycles of Beethoven, Bruckner, Mahler and Shostakovich on SACD? This palate-cleansing disc will take you back amongst the roots of Western Music.

The pieces recorded here come from a remarkable medieval collection, the Krasinsky Manuscript. It originated in Krakow but was kept in a Warsaw Library. During the Warsaw Uprising of 1944, the German authorities ordered, amongst other severe reprisals, that the library be burned to the ground, and the precious documents were declared lost. However, by chance, a Polish scholar visiting a library in Munich in 1948 recognised it, much to his astonishment. The Krasinsky Manuscript is now repatriated to the National Library in Warsaw, where, as the sleeve-note writer wryly tells us, it is kept in a fire-proof safe.

As well as Latin texts from the 13th Century, the manuscript contains 33 folios of 37 polyphonic works dating to about 1440 or somewhat earlier. The musical part was probably created in Krakow Royal circles, as it begins with 'Crakovia civitas' a joyful hymn for soprano solo celebrating the town and its shrine of St Stanislaus, beautifully sung here by Monika Wieczorkowska with a varied instrumental accompaniment. Most of the works are sacred, although there are parody ballades of a more secular nature. Not surprisingly, the special devotion of the Virgin Mary in Poland is reflected.

Performers Ars Cantus only formed in 2000, but they have rapidly gained renown for their scholarly and musical interpretations of Medieval music, where the roots of the later Golden Age of Polyphony in the 16th Century were being put down. The group includes a soprano, male alto and two baritones, as well as instrumentalists including two medieval fiddles, recorder, mandora and recorder, and a positif organ (portable, with one manual). The singers' pure, non-operatic voices are ideal for this kind of music, and blend well with the resinous timbres of the fiddles. Some of the works are performed a capella, others with supportive intrumental accompaniments, nicely adding recorder, organ or recorder to enhance pleasing variations within the vocals.

Musically, the pieces are both stimulating and moving. The experimental nature of early polyphony involves many excitingly clashing harmonies, as the parts appear completely independent (composers wrote in separate part books, and it was not until many decades later that full scores were used). The works by de Radom (Gloria I), Grossini and Ciconia are in this style. Ars Cantus most convincingly add colour to the sections of the Common (Gloria, Credo) by changing dynamics and rhythmic values according to the prevailing stylistic expectations. They are also adept at the new 'fauxbourdon' style adopted by Nicolaus de Radom in his other works. This involves the cantus firmus (melody line based on plainchant) being harmonised with a sixth and a perfect fourth below, forming parallel chords (the beginning of homophonic choral music). The style simplified training of choristers and, more importantly, made the texts more audible to the congregation. The justly famous Magnificat by de Radom is a fine example of the style, sung with great power and majesty by the male voices.

One of my favourite pieces on the disc is the Gloria by Antonio Zacara da Teramo, an Italian and secretary to Pope Boniface IX. He was musically very active in the early 1400s; he has a wonderfully different sound to that of the northern Europeans, richly and warmly melodic.

The recording is very fine; laid down with HD PCM in the rather intimate acoustic of the Ursuline Convent in Warsaw. It is clear but atmospheric, especially in 5.0 where the rear speakers are quite active conveying the reflections. Timbral details, both vocal and instrumental, are very well captured. BeArTon's presentation has a good Polish and English story about the manuscript and the music, but I would like to have seen the number of vocal parts and instruments listed for each work in the track-list or notes. Texts in Latin, Polish and English are provided, except for the Commons of the Mass. There are some very helpful coloured photos of the performers at a session.

This is an important disc, not just for Poles, but for early music lovers in general. There is precious little music from this period on SACD so far, and the selection from the Krasi&#324;sky Manuscript illustrates its historical significance. More than that - the record is pure pleasure to listen to. An uplifting and revealing look at our musical roots.