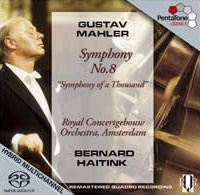 Mahler: Symphony No. 8 in E flat "Symphony of a Thousand"

This is yet another triumph for PentaTone’s RQR series. With visionary conducting and exemplary playing and singing, this set is a treasure to listen to from both an audiophiles' and a musician’s perspective.

Some people might note that this is available on a single disc, with a total playing time of around 76 minutes. Those who are concerned that Haitink has turned into a speed freak for a disc need not worry; it is more the case that (unless specifically called for, like in the concluding “Alles Vergangliche”) there is no dawdling. This approach lends a work that is potentially unconvincing as a symphony some much needed unity.

There are tiny moments of lapses of ensemble and occasional rough tuning from the trumpets now and again but considering the enormity of the forces, the whole co-ordination is managed in a sensational manner. Throughout, Haitink’s relatively straightforward reading allows the drama that Mahler included to come to the fore without attempting to laden it (as too many mistakenly do in this weaker work of the Mahler canon) with, for want of a better word, “significance”.

As will be familiar to those of PentaTone’s modern recordings, the sound balance is very “natural” and unusually for a work with such a mammoth orchestration, there are no instruments placed around the hall except a for a few trumpets in the finales to each part, so apart from missing the very attractive ambience of the Concertgebouw, listeners in stereo are not severely disadvantaged. There is no “hole” in the mix either when swapping to MCH, so one must give praise and thanks to the original Philips engineers as well as to the geniuses at Polyhymnia.

The only vaguely significant criticism I can level at this issue is the lack of texts – not even PentaTone’s website contains any translations. Whilst for many, this will not be a significant problem, some intrepid explorers for whom SACD has opened new musical frontiers, it is a great shame that PentaTone could not have helped overcome a potential language barrier.

To sum up: for all Mahlerians, this is an essential addition to the discography. 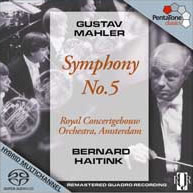