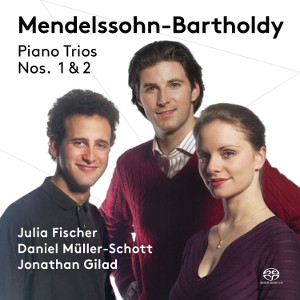 
There are few composers who simultaneously exemplify both restraint and innovation as well as Felix Mendelssohn-Bartholdy. Heavily inspired by both the Classical and Romantic traditions, Mendelssohn saw his life’s purpose as being to “continue working on the legacy left to me by the great masters… The work should also carry on from where it left off in accordance with one’s creative powers, and not be solely an unimaginative repetition of what has been.”

Mendelssohn’s two piano trios provide some of the finest examples of the balance he was able to achieve between deference to the great masters, in this case Ludwig van Beethoven, and a more Romantic sensibility for chromaticism, harmony and orchestration. A noted pianist in his own right, Mendelssohn performed the piano part on the premieres of both trios, along with Ferdinand David on violin and Carl Wittmann on cello. In this PENTATONE release these roles are filled by violinist Julia Fischer, cellist Daniel Müller-Schott and pianist Jonathan Gilad.

The contrast between the two piano works is striking. The Piano Trio in D minor was written in 1839, during the artistic and personal zenith of Mendelssohn’s career. After years of remarkable success all over Europe, his appointment as director of the Leipzig Gewandhaus concerts in 1835 ensured that he could finally began to settle down in Germany, secure in his financial prospects. Two years later, Mendelssohn married and appeared to relish his new life as a husband and father of five. The first piano trio clearly reflects this elated mood, with lively dance movements and joyful, lyrical themes that this release manages to capture perfectly.

In contrast the Piano Trio in C minor, written only five years later, reflects a much more tumultuous period in Mendelssohn’s life. His mother had died in 1843 and his health was beginning to turn for the worse, culminating in a fatal stroke on November 4th, 1847. Musically, this contributed to a period of dark timbres, tense tempos and increased chromaticism. Even during this gloomy time the tone is more understated than melodramatic, tending towards a more subtle form of subversion which is even more difficult to pull off, and all the more enjoyable when performed as convincingly as it is by Fischer, Müller-Schott and Gilad.

This has to be one of the best discs of chamber music making I have ever heard and certainly one of the best recorded. Right from the moment that Daniel Müller-Schott opens the D minor trio one sense that this is really very special and the following entrances from Jonathan Gilad and Julia Fischer only confirm that feeling; despite all three being concert soloists in their own right, this is a real meeting of minds. This is playing that makes one sit up and take notice for all the right reasons; it certainly completely eclipses all other versions of this wonderful music I have heard.

The opening tempo of the D minor trio is perfectly judged, not too quick to rob the music of its inherent lyrical nature nor lacking in drama in the more heated moments, and the balance that the trio and PentaTone achieve is a marvel to behold - only live have I heard such a natural blend of instruments before today. In the Andante, such is the beauty and restrained passion of the playing that this music really tugs at the heart strings - it becomes a true song without words here. From this moment of rapt bliss, we are transported into the quicksilver world of the Scherzo and seldom can this have been played with such delicacy or vivaciousness; Gilad really shines with his self-effacing virtuosity here. As the twinkling piano part of the Scherzo fades in the memory, the drama of the opening movement returns in the Finale but without such gorgeous lyricism; this movement not only taxes the performers but unless it is well characterised it can be taxing for the listener too - not that there are any concerns here.

The C minor trio is equally successful and enjoys just as sensational playing as the earlier trio. The opening figuration's are built naturally to the climaxes and the players make magic out of seemingly less promising musical material than what opens the D minor trio which is then handed over beautifully to the glorious melody when it finally arrives. As in the earlier trio, the Andante provides balm for the senses and, after such an electrifying first movement, it is very much needed! A bustling Scherzo then provides Gilad to demonstrate his superb technique again but this time the notes are much more evenly spread out so Fischer & Muller-Schott also have a chance to shine here and they take this with both hands. As in earlier movements, the C minor trio places slightly emphasis on the pianist than in the D minor trio and the Finale is no exception; all three protagonists are called on to provide lyricism and virtuosity that is audibly facile which this team come up with ease. A wonderful conclusion to a great disc.

The recording, as we have come to expect, is excellent but I feel that this sets a new standard for PentaTone; rarely has any chamber music sounded so lifelike. Fortunately, this quality reflects the quality of the playing and the feeling is recalled of when I first heard MCH but I am now regularly "immersed" in beauty, so this is really something very special indeed (6 stars out of 5 would not be exaggerating the quality of either performance or recording!) Whilst the total playing is just shy of one hour - the pleasure lingers in the mind for a great deal longer (that's assuming that you can resist the temptation to start all over again).

Without a doubt, this is the best chamber playing I have heard all year and I cannot see how anyone would fail to warm to this music when given such loving performances as here which is complemented by the sensational recording. Tremendously exciting! Do not hesitate - buy this for yourself and anyone you know who loves chamber music as, even in "plain" stereo or (dare I say it) RBCD, you & they will surely love it as much as I do.

I was expecting more than I got with this recording. Considering that this group is not a regular performing piano trio (at least not to my knowledge) the performances are really quite good. Ensemble work is pretty precise and they work well together dynamically speaking. But they seem to miss that last bit of unity that they best performing trios seem to possess and hence the result is less than the very best. Still, this is an enjoyable hours worth of great music performed admirably.

My main disappointment is in the sound. The instruments don't seem to gel together in the performing space and the stereo image is a bit hazy/vague to me. When heard solo (especially the piano) the sound is very good. But with all three playing together the sonic image fails to be very realistic. I have noticed that there is quite a bit of out-of-phase information between the stereo channels of this SACD. I am aware of this because I use the out-of-phase signals to create a Hafler-type surround sound in my set-up. I had to turn the rear speakers down to compensate for the large amount of out-of-phase information. I also tried reversing the absolute phase on my preamp but that made matters worse.

For comparison, I played the d minor trio as performed by the Trio Pro Arte on Bis (CD-97). This is a nearly 30 year old analog recording done with two (!) mics and it sounds more natural to me than the recent Pentatone. Their performance is not as exact as the new one but the overall result combining sound and performance gives the Bis CD the edge. BTW, the Bis has the Smetana g minor trio as the coupling. Ah, I miss those old, minimal mic'd analog recordings!

EDIT (Aug 21, 2015): It's been nearly nine years since I reviewed this recording. My audio system has seen a number of improvements over that time and a re-listen gives a more favorable sonic picture than stated in my original review. The instruments do sound better integrated now and the tonalities are natural. I especially like how the piano is captured with a nice balance of harmonics in the upper register. No change in my performance rating - these remain very good performances if not the very best. Original stereo sonic rating was 3 stars. Revised sonic assessment: 4 stars.

This is a disc that will certainly not disappoint lovers of Mendelssohn or chamber music in general. This trio of performers play as one and bring great energy to this music.

Although I am familiar with the playing of Julia Fischer from her fine Russian Violin Concertos disc, I have not had the opportunity to enjoy the talents of her partners in this engaging recording. Daniel-Muller Schott, (cello) and Jonathan Gilad, (piano) could not be better suited to these works.

The playing in the in D minor trio is very impressive. The first movement contains some very persuasive and dyamic playing with just the right amount of energy. The mood of the Andante shifts to a more intimate mood with passionate playing and the recording only adding to the depth of feeling. The charming and exhilirating Scherzo features virtuosic and effortless playing, while the Finale, like the opening allegro, features robust and authoritative performances, with the whole of this trio played very persuasively.

Where the D Minor trio is more outgoing in nature, the C Minor trio is somewhat more introverted and much darker in tone. The opening Allegro features a fiery performance that is indominitable. The Andante is restful and calm. The tone finally lightens in the charming Scherzo with plenty of vituosic playing, the trio playing as one. The disc ends with the Allegro of this trio and plenty of robust and passionate playing.

Mendelssohn was one of the key composers of the Romantic period and "Romantic" could be the best word to describe this music and these performances. The trio of young players on this disc are easily up to the challenges of this music and give their all, diving straight in. When the disc ends, I half expect to hear enthusiastic applause, the performances and this recording being so immediate.

The recording is very realistic with string textures and piano timbres vividly caught. The listener is placed fairly close to the soloists to enhance the sense of intimacy with this music. The surrounds supply only a subtle and pleasing ambient effect. Another jewel in the crown for Pentatone. Highly recommended.