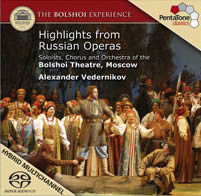 This is another delightful disc from PentaTone with a pleasant mix of the familiar, relatively familiar and fresh discoveries. Many of the usual suspects for a Russian opera company are present (Glinka, Tchaikovsky, Rachmaninov & Borodin) but the Polovtsian Dances apart most inclusions are not the most famous excerpts from the operas chosen. There is also the inclusion of a scene from Alexander Dargomizhsky's Rusalka (which is based on the work of Pushkin not Kvapil like Dvorak's work of the same name) who was previously unknown to me.

Glinka opens the disc with two excerpts from A Life for the Czar; a chorus from Act 2 and Ivan Susanin's aria from Act 4 in which Vladimir Matorin sings the solo delicately and tender emotion. The Dargomizhsky is unfamiliar to me but the music is pleasant without being particularly distinctive. Mikhail Gubsky sings as the Prince in his Act 3 Cavatina before being joined by Alexander Naumenko (the Miller) and the Male chorus in the Mad Scene (also from Act 3).

We are back on familiar territory with Tchaikovsky, where we have a single excerpt from each of Iolanthe, Queen of Spades and Mazeppa. From Iolanthe, Vsevolod Grivnov sings Vaudemont’s Romance; Elena Zelenskaya sings Lisa’s Aria from Act 3 of Queen of Spades and Yuri Nechaev sings Mazeppa’s Arioso from Act 2. “Lisa” is a little over laden at times with vibrato but not the screeching harpy that some soprano’s become. Both Grivnov and Nechaev have a pleasing but thin tone and sing with sensitivity.

Aleko is Rachmaninov’s solitary inclusion on this disc and Taras Shtonda is joined by the Male chorus in the Old Gipsy’s Story to great effect. It is a different type of opera from that which has passed (and what follows) on this disc and it is nice to have such lush orchestration so sensitively played.

Borodin closes the disc with four numbers from act two of Prince Igor (the last of which is the famous dance sequence). The music is all taken from Act 2 with arias for both Prince Igor and Konchak as well as a recititative immediately recognisable (even to those who only know the dances) and the soloists are well matched before the chorus enters in the famous Polovtsian Dances. This is wonderfully done with great sensitivity and tremendous vitality - the chorus sound completely at ease with the work and there are contributions from the Yuri Nachaev (Prince Igor) and Valery Gilmanov (Konchak).

Throughout the soloists, Chorus & Orchestra of the Bolshoi Theatre acquit themselves marvellously if not with quite the distinction that the Russian National Orchestra might be able to bring to this repertoire but one senses the tradition of the performances permeating every note, as one does with the VPO and the Strauss family or Bruckner. Alexander Vedernikov judges the tempi extremely well in every piece and balances the differing parts with great sensitivity.

As ever, the recording side of things is immaculate if not quite one of PentaTone's best efforts. This may be because, as with many opera houses, the acoustic is dry by comparison to a modern concert hall; initially this registers as a shock to the listener but the ear quickly adjusts and soon one forgets that it ever sounded strange!

Recommended for a glimpse of this justly famous Russian institution even for those who are normally allergic to this type of disc. One hopes that more excerpts (and indeed some complete works) will follow from PentaTone.

[When the hi-resolution video war is over, one hopes that Pentatone might be able to issue a visual series from here as the costumes would be an extremely fine demonstration of the new technology.]