There's a really excellent 90 minute video on YouTube of Jarvi and the Kammerphilharmonie Bremen brushing up the 4 symphonies for their fall 2018 performances in Paris. The ... 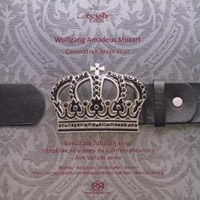 A mixed bag from Coviello's Aachen forces under Marcus Bosch. The Mozart Coronation Mass KV 317 was recorded in the splendid but acoustically challenging Byzantine chapel of Charlemagne, now Aachen's Cathedral. The musicians were deployed in its central octagon, with the much slimmed down orchestra in the centre, choir in two blocks left and right of centre behind them, and the soloists behind the orchestra to the left. There appears to be a small organ console for continuo, but I never heard any evidence of this. This arrangement can clearly be seen on the excellent rehearsal session photographs in the booklet. According to my information from Coviello, a lot of post-processing had to be done to produce the final 5.0 mix, for example the soloist outputs were brought to the front of the orchestra.

KV 317 is an early mass from Salzburg, and Mozart was on his mettle to convince the Archbishop to maintain his substantial orchestra and vocal resources in Salzburg Cathedral. His employer was tending to favour a movement in the church for simpler and less ornate church music. The 'Coronation' epithet, incidentally, is spurious and probably attributable to Salieri. KV 317 was for the Salzburg Cathedral Easter celebration of 1779. Mozart's plea seems to be that richer was better as far as worship goes, as the whole Mass is centred around the orchestra, with the chorus mostly declamatory, all the tunes appearing in the orchestra. As it turns out, this is a good thing for the present recording. The chamber-sized orchestra sounds very well in its not-too reverberant setting. Bosch sets exuberant tempi and buoyant rhythms, reminding us of Mozart's youth. However, from the first seconds of the chorus entry in the Kyrie it is clear something is wrong with the choral sound. There are virtually no audible consonants, but just a generalised vowel-laden movement of pitch. The whole choir sound is fog-bound (although not distant), their soprano line is hardly audible and there is little sense of part-singing. If you don't know the Latin of the Common of the Mass off by heart or are not trying to follow the insert texts, you would have no idea of what they were singing. Changing to the stereo mix hardly helped at all.

Since I found that the vocapella chorus had very good diction in their Verdi Requiem in the same venue(Verdi: Missa da Requiem - Bosch), I can only think that the problem lies with the recording/mixing for the present disc. Fortunately, the soloists enunciate much better, and they make a very good quartet. At the moment, this is the only Coronation Mass on SACD, but of course there is a large selection of excellent ones on RBCD.

The rest of the disc was captured at the Stadtkirche, Glengen/Brenz, also live, and the engineers have been successful in managing a similar level of ambience in the 5.0 mix so there is no audible location break. On the whole, the choral enunciation is rather clearer in the new venue, but it is hardly ideal. The orchestra and soloists are again well-captured.

Just about every soprano aspires to record Mozart's motet Exultate Jubilate, and I confess to feeling it has nearly been done to death. Dorothee Mields, however, has a sweet, light and agile voice, and she sounds very well here, singing it as a devotion rather than making the piece a vehicle for ostentatious display. She is better, in my view, than the experienced opera star Mariella Devia (Mozart - Mariella Devia) who has a mezzo-ish tone colour and a gusty operatic style. Mields, however, is eclipsed by Mia Persson in her Mozart recital for BIS (Mozart: Un moto di gioia - Persson, Weigle), and the Swedish Chamber Orchestra also have a more characterful touch in their phrasing and solos; the BIS recording here is superb.

Mozart's Vesperae solemnae (with orchestra) de confessore (on a feast-day) dates from 1780 and is also a Salzburg work. Its six movements exhibit a range of emotions, and the most famous section, the soprano aria Laudate dominum, is one of Mozart's finest melodic inspirations, anticipating those in Cosi. Again Dorothee Mields is very fresh and appealing, and the whole piece is expressively steered by Bosch. Ultimately, however, it does not displace the very fine period performance by Peter Neumann (Mozart: Salzburg Sacred Music - Neumann) on his exceptional Salzburg Sacred Music disc.

Finally, Bosch leads his chorus and orchestra (and inaudible continuo) in the motet Ave verum corpus, one of Mozart's last compositions and a perfect jewel on his musical crown. I first encountered Mozart when singing alto in my school choir's performance of this piece, and it has been a great favourite ever since. Vocapella do a good job here, although the diction and therefore the attack is still not ideal. However, the music flows well and the melodies are expressively nuanced. A much preferable alternative to the dirge-like and bloodless account on the Fone disc (Mozart - Mariella Devia).

Summarizing, this SACD is enjoyable and worthy of notice if you don't mind a consonant-deprived chorus, and if the programme is attractive to you. It is attractively packaged and with very good insert notes. There are already better performances on SACD, except for the Coronation Mass) and in better sound. As for RBCD, excellent performances abound, both period and modern.