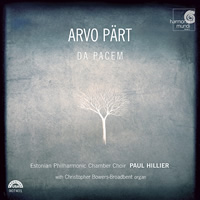 
Nine sacred pieces by Arvo Pärt including of his newest compositions, alongside works from earlier in his career. Pärt's longtime collaborator and biographer Paul Hillier leads the Estonian Philharmonic Chamber Choir and organist Christopher Browers-Broadbent in a third recording devoted to the Estonian composer.