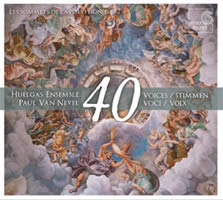 While the latter half of the sixteenth century saw the first stirrings of the Baroque, this period also witnessed the creation of the finest cathedrals in sound, with their foundations in the distant Gothic era of music . . . Composers vied with each other in daring and ingenuity, presenting works with twelve, sixteen, twenty-four and even, in the case of Tallis's famous Spem in alium, forty different voices! The Huelgas Ensemble celebrates its thirty-fifth anniversary with a spectacular selection of these works, recorded live without a 'safety net'.

"40 Voices" was issued in 2006 to celebrate the Thirty-fifth Anniversary of Paul Van Nevel's extraordinary vocal ensemble. Based in Belgium, the Huelgas Ensemble have gained a world-class reputation for their performances of music from the European Middle Ages and Renaissance. The level of their scholarship in deciphering early manuscripts, adopting appropriate vocal styles and period performance practises, presenting innovative concert programmes and making recordings is outstanding. Much of this is due to the energetic and exploratory character of their founder/Director Paul Van Nevel.

It is worth a few moments to consider what is involved in arriving at performances of music from bygone ages. Original sources or early copies have first to be tracked down in libraries or other institutions, and their authenticity, authorship and provenance carefully researched and determined. From the Middle Ages to the beginning of the C17th, musical manuscripts contained no bar lines, ties or slurs, key signatures, tempo or expression marks. Note values were indicated mostly by breves and semibreves, in a relational system called "mensuration" which could vary within and between vocal or instrumental parts. All of this has to be converted into modern notation, requiring certain assumptions (and guesswork) to be made by the editor-transcribers. Not all scholars agree on such matters, so there are various modern editions, sometimes markedly different.

Until the beginning of the C17th, when bar-lines came in, making vertically-arranged full scores was extremely rare; the horizontal arrangement was used, each part being written out separately, so a manuscript was a collection of parts. This is astonishing when one considers the multi-voice pieces such as those on this recording; a composer had to carry the movements of up to 40 or 60 independent parts in his head while writing out each part, as well as being able to oversee voice entries in performance. Truly this is another form of skill virtuosity on the composers part, which is celebrated here just as much as the vocal virtuosity of the performers.

One must also consider the very real difficulties that the singers of these complex pieces had to cope with. This was brought home to me during a performance of Tallis' 40-part motet 'Spem in alium' by the intensively-trained Edinburgh Festival Chorus. It ground to a halt after several minutes, and Maestro Abbado had to turn to the audience, saying simply "My fault! We will start again...". The present disc was bravely recorded at a live concert by the Huelgas Ensemble in the warmly resonant Cistercian Abbey of Noirlac in Central France. This is the very architecture which fostered the growth of polyphony, and like their fore-runners in the Renaissance, the choir had no cushioned landing, but seem to pull off a near faultless performance.

The rise of polyphonic music during the Renaissance was one of the key features of that cultural movement, beginning in the Church and eventually ending in domestic situations with the madrigal. Rising to the challenge, composers vied with one another (as an attempt to impress their employers) in making music with more parts and greater complexity of structure. Such complexity, however, was anathema to a Catholic Church which was fighting a growing Reformation: it looked for simplicity and was insistent that listeners should be fully able to understand the message of the texts, not just revel in the beauty of the notes. Some of these advanced polychoral pieces, therefore, were only able to be performed in secular settings of grandees with the funds and space to house such large bodies of singers - and the instrumentalists which accompanied them, for even in churches at the time, not all sacred music was sung 'a capella'.

Van Nevel's programme (see below for track list) features a variety of splendid Renaissance polychoral styles from various parts of Europe, variously with 12, 13, 16, 24 and 40 independent parts. In addition, the disc begins with 'Nomen mortis infame' by Willem Ceuleers (b.1962), in 35 parts to commemorate the Huelgas 35th Anniversary. Ceuleers is one of the bass singers in the choir, and his tribute is an amazing simulacrum of the ancient polyphonic styles, using every device of the Golden Age composers. The music is recorded in a semicircle, beginning in the left rear and sweeping around the front to the right rear speaker. So convincingly in period style is it, that one is surprised to hear some modern tone cluster harmonies around 3'30". This tour-de-force achievement by a Huelgas singer/scholar/composer demonstrates the technical and interpretative skills available to the choir in its resurrections of Renaissance polyphony.

For those interested particularly in the Tallis 'Spem in Alium', it is given a powerful performance in full surround sound, sung with flair and purpose, with sweet sopranos and steady male altos. It rather outclasses the Halsey version (XL, Choral Works for 40 Voices - Halsey) with its somewhat strained sopranos on the higher lines, but it is as fine as Harry Christophers Anniversary Disc with the Sixteen (Tallis: Spem in Alium - The Sixteen). Christophers brings his 'Spem' in at 9'40" (also with the choirs spread around the room), whereas Van Nevel takes 10'23", around the commonest tempo choice.

For some time it has been thought that Tallis was motivated by hearing Striggio's 40-part motet 'Ecce beatam lucem', which the Huelgas also present on this disc. However, since the discovery in 2007-8 by Davitt Moroney of Striggio's Mass in 40 parts (with the Agnus Dei in 60 independent parts!), it is now realised that this was the stimulus for Tallis. Striggio, as an ambassador for the Medici family, arrived in England in 1567 carrying a copy of the Mass, and requesting to be able to swap notes with England's major composers.

Robert Hollingworth with I Fagiolini and a large band of the best Renaissance instrumentalists have recently released a sumptuous account of the Striggio Mass and the Tallis 'Spem in Alium' for Decca RBCD. Fascinatingly, this also includes a DVD with the music recorded in DTS 5.1. This version of the Tallis is revelatory in its rich instrumental accompaniment (and fine surround sound, with the choirs arranged in a circle around the listeners). A later version of the Tallis with more subdued instrumental support can be heard on Tallis: Spem in Alium - The Sixteen, both of these performances can be usefully compared with the a capella version of the Tallis by the Huelgas Ensemble. Our fascination with these flagships of Renaissance polyphony remains unabated in the modern era; the Decca disc went into the Top 10 on iTunes!

Hints of the spatial separation of these flagship works in performance was sometimes indicated in their MSS, and undoubtedly aids in helping the brain and ear make sense of such complex webs of sound, so the multichannel version of '40 Voices' is really the way to go. Clear and detailed as the Stereo track is, the music seems flat after listening in MC. My only criticism of the recording is that an opportunity to patch in atmospheric ambience between tracks was missed, the blank inter-track being quite disturbing.
The SACD's surround experience is quite affecting, with oceanic waves of sound washing around the room almost hypnotically, certainly having a memorable impact on this listener. I certainly give a high recommendation to Van Nevel's '40 Voices', while Halsey's and Christopher's discs have different aspects of vocal surround music which should also be candidates for a collection of polychoral pieces.