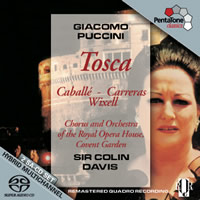 Ever since its first release on LP in 1976, and subsequent transfer to CD, this recording of Tosca has been high on the list of the most desirable versions of this opera. While for many, the EMI Callas/ Gobbi/ de Sabata or Decca Price/Taddei/Karajan versions will be nonpareil; this version has many outstanding virtues that make it a first choice for those seeking an alternative to those two indispensable sets.

What distinguished it from the countless other versions, issued before and since, was the interesting casting of the main roles, the choice of a conductor not normally associated with Puccini and the superb quality of the recorded sound.

The latter is strikingly vivid in PentaTone’s RQR re-issue and totally eclipses anything to be heard on disc elsewhere.

The thrilling Cavaradossi of the young (30 year old) José Carreras is ardent and passionate throughout, and he meets the vocal challenges of the role triumphantly. This is by far the finest of his three commercial recordings of this work.
The Tosca of Montserrat Caballe shows her beautiful soprano voice and peerless technique to perfection. Though some may prefer a more Italianate sounding heroine, her portrayal has a subtlety and musicality rarely found elsewhere. Her ‘Vissi d’arte’ with its wonderful control of breath and dynamics clearly illustrates these qualities, which are evident throughout this recording.
Ingvar Wixell’s Scarpia has always been a more controversial assumption of the role of Scarpia. He sings most sensitively but does not always sound, to some ears, quite evil enough. He does, however avoid the stereotypical operatic villain portrayal and I enjoyed his performance as much as those by Gobbi, Taddei, Raimondi and Terfel.
The smaller roles are also strongly cast. Samuel Ramey’s firm, noble sounding Angelotti and Ann Murray’s boyish Shepherd are ideal while Domenico Trimarchi never caricatures the role of Sacristan unlike, for example, Corena on the Decca Karajan set.
From the riveting opening chords with vivid rasping brass, Colin Davis and the Orchestra of the Royal Opera House give a magnificently paced reading of the score. Every detail of Puccini’s wonderful orchestration is crystal clear and the balance between voices and orchestra is ideal.

This recording represents a departure from PentaTone’s usual RQR series in that the original 8-channel tapes have been used to produce, for the first time, a multi-channel mix. This has captured the spacious acoustic of Watford Town Hall beautifully, while the extended use of the surround channels for something more than just ambience is imaginative and tastefully done.

There is, however, one caveat that may perhaps surprise some listeners familiar with the LP or RBCD versions. PentaTone have adopted a ‘purist approach’ and avoided the use of the separate track on which the ‘sound effects’ were recorded and presumably added later. This means that no cannon is heard when Angelotti’s escape is discovered (which makes a nonsense of his line ‘Il cannon del castello!’) nor throughout the Te Deum scene. Scarpia does not slam the window shut to silence the off-stage cantata in Act 2, while in Act 3 Cavaradossi is executed without the sound of any shots being heard!

This is the opposite extreme to the Karajan version, where the cannons in Act 1 sound like a rehearsal for the 1812 Overture, and Culshaw’s effects are sometimes over the top, but the original Philips recording had these effects just right, and thus avoided any sense of a studio or concert performance.

On the plus side, the traffic noises clearly audible on the original CDs (particularly those just before ‘E lucevan le stelle’) have been eliminated completely, and the break between discs is made sensibly after Act 1.

The discs are nicely presented (a double SACD box inside a slip-case that also holds a full libretto in four languages), and on musical grounds alone this is an outstanding SACD set that is unlikely to be equalled let alone bettered in the foreseeable future.

In considerably better sound (and singing - not vocal acting though), this must surely be the reissue that knocks the classic EMI Callas/de Sabata reading from it's pedestal.

The cast is well chosen, with Cabellé in fine voice throughout - unlike her many rivals, her voice never seems to be unduly under strain and her phrasing always displays musicianship of the highest order. Wixell is an unusual Scarpia; he is not in the least "arch" and thus his more humane wickedness is all the more sinister. Carreras is thrilling as Cavaradossi and it is nice to have a fresh voice showing such fine qualities and working so well with the other members of the cast. The minor roles are also well sung and must count amongst the strongest supporting cast on disc; like Wixell, none of them indulge in vocal caricatures.

There is the crucial question of how ‘Vissi d’arte’ is sung - tender and rapt are the first words to come to mind. Passionate outbursts are given their due head but never let the flow be disrupted and the build up for the climax is superbly judged by all concerned.

The playing of the Royal Opera House, Covent Garden under Sir Colin Davis is quite superb - at all ranges of the dynamic spectrum the colours are vividly represented with playing from the brass that almost touches on the vulgar (as Puccini asks) but never quite crosses the line into tastelessness. Davis' pacing is also very successful, never letting the tension dip but providing breathing space when needed.

A brief essay precedes the full libretto in Italian together with English, French & German translations. One hopes that future opera presentations from Pentatone continue in this vein.

The sound is quite magnificent and never sounds its age - the depth of the sound stage is stunning and there is tangible distance to the off-stage singers. One slightly disappointing aspect (and which diminishes the impact of the story a little) is the omission of the sound effects that could have easily have been included tastefully (not that there was anything wrong with them in the first place on this issue, unlike Culshaw mastered accounts for example).

The minor reservation about missing effects aside, this is a hugely enjoyable set and one sincerely hopes that Philips recorded other discs in Quadraphonic sound (and that Pentatone will reissue them before too long).