Downloading now from eClassical. 24 bit and 5.0 surround. Sadly, I asked Native DSD and they replied that most BIS recordings are PCM and thus not eligible for Native ... 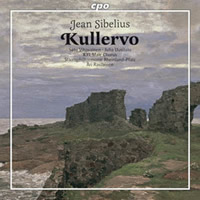 It may be something of an overstatement, but we’ll say it anyway: Finnish art music was born in Vienna. It was in the Austrian capital that the young Jean Sibelius first began thinking about his first symphony, Kullervo. He was determined to create a specifically Finnish music on the basis of the story of the hero Kullervo from the Kalevala epic. Finnish music was then dominated by other cultures and especially by German culture. Music that for the first time would draw on ancient Finnish ideas had to make a big impact. And so it was: Sibelius himself conducted the premiere of Kullervo in April 1892 and with it celebrated a sensational success that made him the musical outrider of Finnish national interests almost overnight. With Kullervo Sibelius and Finland successfully set out on the path to an independent national music. Ari Rasilainen has always wanted to record an interpretation of Kullervo with his State Philharmonic, and the result of this heart’s desire is absolutely magnificent.