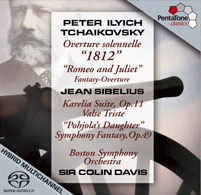 The trademark of this disc is one of serious minded polish. This has both benefits and drawbacks - in the opening of the 1812 overture, one feels that a little more panache would have helped some of the weaknesses inherent in this piece. However, the second half of the overture brings less restrained playing and conducting that allows the effects of the surrounding cannon fire to be properly enjoyed, although the sounds of what I presume are supposed to be fireworks right at the end are a little distracting. This is, musically at least, far better than the comparable Telarc offering: Tchaikovsky: 1812 Overture - Kunzel. The Telarc might offer more modern sonics and a wider amplitude on the cannon's but musically it is about as interesting as listening to paint drying.

Such polished restraint brings immediate dividends to a piece such as Romeo and Juliet - here histrionics are left well alone and Karajan would have been proud at the sense of pathos that Davis manages to bring to epilogue. In this and the other works, the Boston SO really display their collective talent as an ensemble - it is sad that we do not have discs from the modern era. In the stormy development, the interplay between the supporting violins is almost as captivating as the glorious melodies that Tchaikovsky allots to the woodwind.

Sibelius now becomes the composer to which we are treated. Unlike some recent accounts from Vänskä (amongst others), the tempi in Pohjala's Daughter are more measured but are never slow. It is here that the BSO really come into their own, playing with a dignified passion that is endearing yet exciting. Perhaps some may find the Karelia Suite a little subdued in the first movement but it is a great achievement to make it sound so refined without robbing it of life - the last movement brings a wide smile to ones face.

With a slightly thin sound, this reveals that the tapes were not recorded in the last few years unlike the illusion of many in the RQR series. The modernity present in the Sibelius is served better than slightly dry Tchaikovsky. The clarity of Boston's Symphony Hall is remarkable.

Recommended for the musicianship.