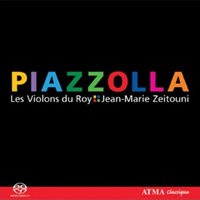 This is a simply thrilling disc - the musicians are uniformly superb and are given a recording to match.

The disc opens with Piazzolla's Four Seasons (as seen from Buenos Aires) which, in the words of the accompanying notes, are "liberally re-worked and arranged them for violin and string orchestra" by Leonid Desyatnikov. There are snatches of Vivaldi (and others) sprinkled in the midst of the movements and it is a played with tender beauty and joyful abandon as the mood changes - wonderful stuff. The way the last season fades into Vivaldi's "Spring" played on harpsichord is a very nice touch.

We are then presented with two of the three works here in their original incarnations: the Two Tangos for String Orchestra (entitled Coral & Canyengue). The writing shares the same melodic vein as the Four Seasons, although there is no disguising the more idiomatic string writing on display here.

Sandwiched between Fuga y Misterio and the Angel-duo (Milonga del Angel & La Muerte del Angel), their arranger Jose Bragato is also featured as a composer in Graciela y Buenos Aires for Cello & Strings which is performed by Benoit Loiselle who proves to be as eloquent and virtuostic soloist as Pascale Giguere in Las Cuatro Estaciones portenas. Bragato composes in a similar style to Piazzolla so this solitary compositional contribution doesn't disturb the mood of the disc; his arrangements are more in keeping with Piazzolla's style as well which makes the rest of the disc flow together more successfully.

The playing is simply extraordinary and I can't wait to sample more discs from this ensemble. They are every bit as good as, say, the Netherlands Chamber Orchestra and are arguably more refined whilst retaining the excitement and passion that is too often lost with excess polish. The way they get the "scratchy" sound in such a seemingly natural way is a joy to the ear. Jean-Marie Zeitouni conducts with real style too.

ATMA are a new company to me but there is nothing to suggest that they are in any way beginners when it comes to recording - this is in the highest Pentatone category and a fantastic demonstration of how strings can sound.

Highly recommended - this is a disc that shows a great ensemble letting their hair down with style!