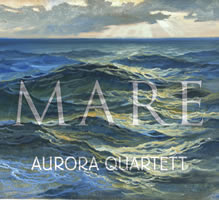 
Beginning in the music circles of the aristocracy of the 19th century, music for 4 pianists has been highly popular.It is well known that Chopin and Liszt used to perform together with colleagues music for eight hands, as they did, for example, in 1838 in Rouen playing such a transcription of Beethoven’s 8th symphony. Since that time, numerous ambitious and brilliant original compositions for four pianists have been created of which the Norwegian works by Bjørn Kruse, Trygve Madsen and Wolfgang Plagge are among the most outstanding. The Aurora Quartett is a renowned international ensemble of pianists that is dedicated especially to the performance of music for four pianists.

The Aurora Quartet are a charismatic group of pianists who play with flare and style in this 2L disc of works for four pianists.

Trygve Madsen
Grotesques and Arabesques(1987)
The opening work in this collection, which is made up of five short pieces, describes the composers each movement is named after. It starts with Dmitri (Dmitri Shostakovich), which is a lighthearted gallop. Maurice (Maurice Ravel) is more melancholy and the harmonies remind me of Francis Poulenc. Richard and Arnold (Richard Strauss & Arnold Schoenberg) is an interesting interplay between the soloists. The piece is atonal in nature which creates a tension between the performers. There is a playful dance near the end. Claude (Claude Debussy) is a light and airy piece and the last movement Sergej (Sergej Prokofiev) is a fun gallop with alternatiing slower sections.

Wolfgang Plagge
Mare Op. 93 (1997)
This work starts with a "Tranquillo" which has a rather hypnotic, perhaps even kaleidescopic effect with plenty of tone colors of the piano throughout. It starts with one piano, then another and so on joining in as the music swells. "Un poco piu inquieto" features one piano playing a short repeated figure that suggests a march with the other pianists playing around that main idea. The music swells into a great crescendo in the middle. There is an almost improvised feeling to this movement. "Nocturne - Lento" is calmer as the soloists use plenty of pedals to create swirling tones here and there. The closing "Tempestoso" suggests a coming storm with repeated figures and rhythms and dissonant harmonies. The soloists play, at times, in unison. There is a contrasting slower section recalling earlier moments in the piece which is sometimes interrupted by dissonances from the other soloists. The work ends calmly.

Wolfgang Plagge
Concerto Grosso III Op. 108 (2005)
This work, also by Plagge, begins with the "Molto Lento, tranquillo e maestoso" characterized by a series of short figures repeated, almost representing a felling of isolation. Again, a solo piano is joined by the others as the music swells and recedes with plenty of dissonant harmonies. "Vivo, energico - meno mosso, lugubre" features agitated rhthyms and stark harmonies. This movement is like many on this disc, anchored by one or two soloists playing repeated figures with the others playing in an improvisatory style. This is contrasted by a slower section with the dissonant harmonies popping in and out. A hammer stroke breaks the calm and the music lets loose into a storm.

Bjorn Krusse
Boogie Retention
The last work in this collection is the "Boogie Retention" which features stark harmonies and dancing rhythms which suggests "Boogie Woogie" music. The music is characterized throughout by fits and starts, repeated figures, dazzling finger work and fiery intensity.

All of the works on this disc are certainly eccentric and I would say my favorites are the "Grotesques and Arabesques" by Trygve Madsen and the "Mare" by Wolfgang Plagge. I also enjoyed the "Concerto Grosso" but I think the "Boogie Retention" goes on a little too long.

The sound is very good, especially when low notes are accentuated by plenty of pedal use. The soloists are divided across the front with the rears providing lots of ambience and depth. From what I can gather this is a PCM recording with more than adequite sound. A worthwhile purchase if you like your music with plenty of dissonance and virtuosity. Recommended.

(This review is for the Multi-Channel portion of the disc)