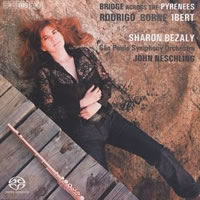 
Separated by the Pyrenees, the musical milieus of Spain and France have sometimes been like oil and water – or maybe like oil and wine. It took Bizet's opera Carmen to open the ears of the French to the Spanish rhythms and inflections which were to become so important to so many composers after him, from Debussy to Ibert. On the present disc, Carmen – in the guise of Borne's Fantaisie brillante – plays a similar role, creating a bridge between Rodrigo's Concierto pastoral and Ibert's Flute Concerto, two of last century's main concertante works for the flute.

Soloist Sharon Bezaly will hardly need a closer presentation after her highly praised recordings of the past couple of years. Her recital with pianist Ronald Brautigam (BIS-SACD-1429) and her recording of Mozart's concertos (BIS-SACD-153901) have garnered such high praise and so many distinctions that it would be impossible to list them – suffice it to say that the reviewers have called her 'a sorceress of timbres', 'God's gift to the flute', 'a First Lady among equals' and a 'graceful Mozartean, with limpid tone, an impish sense of humour, and sometimes staggering breath control.’ The present recording was made with the São Paulo Symphony Orchestra and conductor John Neschling, whose performances of the music of Brazilian composers Guarnieri, Mignone, Braga and Santoro have been praised for their vitality, rhythmic vigour and wide range of colours – all qualities that should be just the thing for building a bridge across the Pyrenees.