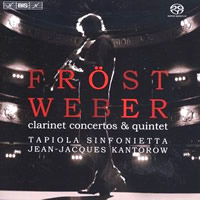 
Like Mozart with Anton Stadler and later Brahms with his Richard Mühlfeld, Carl Maria von Weber could also call upon an exceptional clarinettist: Heinrich Baermann, who inspired all of the works on this disc.

Although they were written before Weber had composed Der Freischütz, the opera which made him an instant star of early Romantic music, they are now among his most played works. The Concertino and the two Concertos were all composed in 1811, almost in a frenzy that testifies to the inspiration Weber must have experienced when first hearing Baermann. It’s also audible in the music which showcases the instrument’s technical capabilities and displays its richness of colours, while providing it with gripping moments in aria-like slow movements and virtuosic and vivacious finales. To perform these works an all-round musician is needed: someone like Baermann – or like Martin Fröst!

With his latest release on BIS - chamber works by Brahms (BIS-SACD-1353) - Fröst captured the hearts and ears of both audiences and reviewers, as testified by a number of distinctions and by the following quote: ‘[His] smooth, even tone is deliciously seductive, and he can darken or lighten the sound at will, from velvet warmth with a sensitively applied vibrato, to a soaring clarity that never goes louder than lovely … I could write more, but if you'll excuse me, I'd rather like to be seduced all over again.' (Andrew McGregor, BBC Radio 3: CD Review). Before that, Fröst's take on Mozart's Concerto and Quintet (BIS-SACD-1263) caused similar reactions, for instance in International Record Review: 'Better recorded performances of these towering masterpieces may exist, but I have never heard them. In their technical proficiency, style consciousness and broad, yet never exaggerated emotional range, they shine as major achievements.'

Weber wrote these works for the celebrated clarinettist of the Munich Court Orchestra Heinrich Baermann whose playing he greatly admired. Had he heard them played by Martin Fröst he might well have revised his dedications!

Fröst’s playing is wonderfully flexible and sensitive throughout this disc and it is these qualities, even more than his astounding virtuosity that is the overriding impression left by this SACD.
The finale of the F minor concerto, for example, is taken at a very fast pace for its Allegretto marking, but is played with a lightness and ease that is totally beguiling, while the depth of expression that he imparts to the music in the slow movements of all four works is quite remarkable.

The accompaniments by the Tapiola Sinfonietta under Jean-Jacques Kantarow are alert and stylish (witness the urgent orchestral introduction to the first concerto), but I was slightly disappointed that the Clarinet Quintet is played in an arrangement, by the conductor, for string orchestra. The full strings add an unwelcome heaviness to a chamber piece that, had it been played in its original form, would have provided a welcome contrast with the other three works on the disc. To be fair, it has been recorded a few times in this form, so you might not share my concern.

The recording, as usual from this source, is of very high quality with an ideal balance between soloist and orchestra. The orchestra is set back in a pleasing ambience behind the soloist and there is, thankfully, no evidence of intrusive breathing sounds and clattering keys that are found in a number of other versions of these works.

Another splendid achievement from Martin Fröst and the BIS team.