Totally agreed! That's exactly why I didn't buy this box set. Let's hope that symphonies 0 and 8 will eventually be released individually.

Contrapunctus: it's not available to me either! But I'm able to get around it. Is there a way to contact people directly? I could explain to you how I do it. 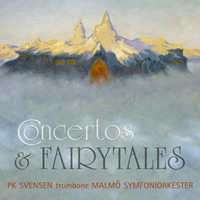 "I found! I found!" says Askeladden, the hero of countless Norwegian folk tales as he picks up numerous strange and seemingly worthless objects from the road, objects everybody else would go by without noticing. Askeladden possesses this uncanny creative intuition which outwits any sinister force, and helps him in his quest to achieve his aims - most frequently being marrying the Princess and ruling half the Kingdom. The Askeladden creativity has been the underlying power source when one of Norway’s most prominent trombonists, PK Svensen, gives away four Norwegian treats for trombone with Malmö Symfoniorkester.

Taken at face value, a disc of four works for trombone and orchestra by four contemporary Norwegian composers opens the possibility of a daunting challenge for the listener. Happily this proves not to be the case at all. This is music as fresh and bracing as the Norwegian climate!

The pieces themselves are for the most part quite melodic, varied in style and each is superbly orchestrated. All four composers make much delicate use of percussion instruments in these kaleidoscopic scores, particularly, glockenspiel, celesta, triangle and tubular bells, and the individual timbre of these instruments has been captured to perfection on this superb (24bit 44.1kHz) recording. In addition, the sound has a wide dynamic range and a particularly fine front-to-back perspective, while in 2L’s multi-channel mix the generous acoustic of the Malmö Concert Hall has been captured with breathtaking realism.

The impressive Trombone Concerto, written for the soloist on this recording PK Svensen, by the multifaceted Wolfgang Plagge (composer, pianist and even record producer) opens with an insouciant main theme on the solo trombone, which is then developed in a lively manner by the soloist and orchestra. The slow movement starts with a solemn double fugue on the strings, slightly reminiscent of the opening movement of Bartok’s Music for Strings Percussion and Celesta. Eventually the soloist enters and the music builds to an anguished climax that is followed by a long cadenza before the strings re-enter and bring the movement to a tranquil close. The ‘Brioso’ finale in 7/8 time, a tour de force by PK Svensen, features another cadenza before the orchestra brings this rhythmically exciting movement to a sudden close.

The concerto, by the 82-year-old Egil Hovland written in 1972, is unmistakably Nordic. It is a very attractive melodic piece in which a lively and cheerful first movement and cadenza lead without a break into the reflective slow movement, that in its short time span encompasses many moods. Again with no pause, the finale begins with the soloist stating its principal march theme. Throughout its development and transformation the music provides wonderful opportunities for PK Svensen to show his virtuosity before building to a dazzling conclusion. This piece made me keen to hear more music by this composer.

Magne Amdahl’s short ‘Elegi’ has a jazzy, bluesy feel that enables the soloist to illustrate the more lyrical aspects of the trombone but still manages to incorporate a contrasting central section.

The youngest composer featured on this SACD is Torstein Aagaard-Nilsen whose ‘Fanfares and Fairytales’ was another work written for PK Svensen.
In the accompanying notes the composer writes “There is not the sense of a soloist being accompanied by an orchestra and there are a lot of different things going on at the same time as several musical structures meet and part all the time”.
This perfectly sums up the first and last movements of this piece. In between these two complex structures, that are quite dissonant at times, there is a short ‘Cadenza’ consisting of a dialogue between soloist (playing mainly muted) from front right and side drum from rear left. This is very striking in the multi-channel mix.

Finally, praise must be given to the superb players of the Malmö Symfoniorkester under Terje Boye Hansen and Christoph König who throughout are equal partners with the soloist.

This truly thrilling and imaginative recording deserves a top recommendation.

Concertos and Fairytales is a collection of four compositions written for trombone and orchestra. The word "modern" could easily be used to describe these works and some may not care for these pieces as they abandon traditional harmonies. However, no one is going to call this disc dull and music lovers owe it to themselves to give a recording of this quality a listen.

PK Svensen is the soloist and is a charismatic performer who plays with plenty of ease and bravado. These are all dynamic and innovative works that lovers of modern music will appreciate. PK Sven sen's's playing may even convert those who do not appreciate modern music. This music places Svensen clearly within the orchestra and sometimes it feels as though he has stepped right into the middle of your living room! The music may be called "melodic", but I think that these pieces are more lyrical, as they do not seem to have any set tunes within them.

The first piece by 2L in-house pianist/composer Wolfgang Plagge probably is the most atmospheric of the works here and to my ears, seems to be Russian influenced in style. As with all of the works in this collection, this music has a rather improvised feeling to it. The concerto by Egil Hovland displays beautiful percussion throughout and even seems to have some touches of humor. The Elegi by Amdahl is the shortest piece at under four minutes with distinct jazz influences here and there. The final work by Aagaard-Nilsen is the biggest and boldest of this disc and never sits still. With plenty of special effects on the trombone and dissonant harmonies, this concerto is very free form in feeling. It is also marked by the strongest percussion, particularly by loud kettle drums.

These are all virtuoso works with two of them composed for the more than capable soloist who graces this recording. 2L must be commended for putting together such a persuasive package of music for this all too rarely featured instrument as soloist. With excellent support in the rear channels, the sound is big, broad and open and features what I consider to be the best sounding percussion I have heard on any record to date! A disc not to be missed.

(This review is for the MCH portion of this disc.)