Scenes from the Kalevala - Slobodeniouk | Graham Williams - Yesterday 06:34 am

Hi John Though the Sibelius is a world premiere recording it is the music of the three other composers that is the main attraction here. I was bowled over by this recording ... 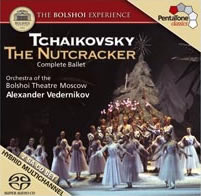 I have hesitated adding a review of this glorious music for some time. Why? Well, I just couldn't quite make up my mind about what I felt when listening. Let no-one be in any doubt that the recording lets you hear every single note of the fabulous score that Tchaikovsky bequeathed us. However, did Vedernikov impart just the notes or the emotions beneath the surface? Even if the emotions might be considered lacking, does this matter in this most glowing of compositions?

Well, in my mind Vedernikov moulds phrases very seductively and entices a playing style that is akin to the response the Mikhail Pletnev can elicit from the RNO in ballet music. All the phrases have a lift and grace to them which is entirely beguiling and does complete justice to the ecstatic sections of the piece. There is a distinctive Russian approach to timbre and tuning that those accustomed to (say) Fischer's Budapest band will decidedly tart on the ear - perhaps necessary in this music!

Those who are wondering if the "set piece" numbers are well executed can be assured that they are indeed fabulously well played - all the textures are clean and polished for the items that make up the suite that is shamefully more famous than the complete ballet. The children in the waltz at the end of Act I are delightful and crown the glistening flourishes with a innocent purity that is a joy to behold.

The pacing is firmly in the central tradition - nothing overly fast nor ponderously slow. The area where some might have doubts is the conception of the whole that is evinced by Vedernikov. There is little in the way of steering an emotional journey that many interpreters have attempted to find in bygone eras but I am perfectly happy that this strategy was not pursued - this is a fantasy of almost complete delight and I find it hard to reconcile a musical journey that evokes Mahler with this piece.

In the end, I could not help but falling deeply in love with the music all over again - something that the performers must surely gain some credit for their effect on me! I have found it increasingly difficult to abstain from these discs. To further enhance our enjoyment, Pentatone have offered us two encores.

The first is the reasonably substantial extract from Swan Lake which I hope, as it is very difficult to perform the complete ballet on just two discs, that the rest of the piece is being organised for a future release as we speak. The second encore is the Polonaise from Eugene Onegin and is played with the same flair and grace that is a constancy throughout this pair of discs.

The recording from Pentatone is quite fabulous as well - having set the microphones back compared to the earlier operatic recital, the hall gains a sense of resonance that was utterly lacking in the earlier Bolshoi Opera excerpts disc. The sound stage is also most convincing and a worthy addition to Pentatone's growing catalogue.

In summary, this is a gorgeous disc of utterly beautiful music that cannot be played often enough. Highly recommended.

I too must weigh in on this fabulous disc. Vedernikov and the Bolshoi Theatre Moscow give an inspired performance of this most famous work.

There is an immediacy in this performance and I find that I simply have a hard time putting this disc down for very long. I continue to play it regularly. There is an oppulence and sweep in this interpretation and although some may say that this performance does not match the famous Dorati recording, this performance has plenty of intensity. The music is always moving forward.

There is a wonderfully large acoustic in this recording and Vedernikov and the Bolshoi players are brought very vividly into your living room. Percusion comes through crystal clear and there is plenty of warmth in the brass and bloom on the strings. The balance is exceptional so that one can easily pick out where the players are. This is MCH sound that is truly involving!

The recording is warm and open. The climaxes are truly astonishing with no harshness. The recording has a very wide dynamic range, so don't be surprised if you need to turn up the volume on your equipment more than you normally would.

The "Pas de deux" from Swan Lake and the "Polonaise" from Eugene Onegin are admirable fill-ups, but the excellent performance and recording of the Nutcracker is what lingers in my mind most. I think this disc will certainly become one of the great Nutcracker recordings in years to come.