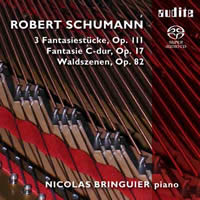 
The Fantasy in C major, Op. 17 was composed during a period of great desperation and longing for the unattainable Clara Wieck. It has been often designated as Schumann’s most successful piano work, contrasting the principle of the free rhapsody with the tightly-knit sonata form.

The “Forest Scenes,” Op. 82 are nine miniatures related to the enchanted world of the “Scenes from Childhood.” They are programmatically designed and marked by a folkloristic tone. Outstanding amongst them is the scene entitled “The Bird as Prophet,” in which the song of the bird is naturalistically imitated.

A disc that bodes well for the future but Nicolas Bringuier isn't quite producing the finished article yet.

The best items on the disc are the musically hardest: the Fantasie and Fantasiestücke are played with considerable technical authority and the musicianship is good but not first rank. What is less enticing to this recital is the highly mannered approach adopted for Waldszenen (one of Schumann's many late but childlike compositions that are notoriously difficult to pull-off) - the pure simplicity that Schumann asks for in many of the movements is completely ignored and too many times the rubato detracts rather than enhances the mood. There are also (curiously in this work much more so than the others) far too many times when the left and right hands are deliberately desynchronised when the score clearly requires unanimity - a commonplace effect about 80-100 years ago but it doesn't sound entirely natural in the hands of Bringuier.

The sound is good but cannot be claimed to be exceptional - all credit to Audite for showcasing young talent; I hope that it matures and delivers the promise of, especially, the Fantasiestücke. 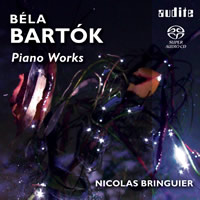