Looking at the waveform this is clearly mastered from 44.1khz Red Book PCM - but the recording is lovely, the pieces are uncommon, and the multichannel is good.

Contrapunctus and DYB: Please feel free to email me through my mailto: link in the "About" page. I can facilitate your off-site discussion.

Commenting purely on the mastering and not the content - looking at the waveform of the SACD content, it's clear this was mastered from 44.1khz PCM - so unless you want the ... 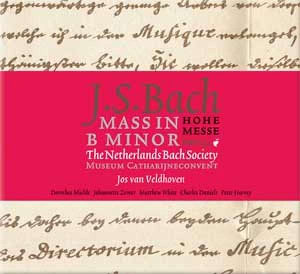 This new luxury box of Bach from Channel and the Netherlands Bach Society has been eagerly awaited. Attempting a review of another B minor Missa recording is something of a poisoned chalice, as its interpretation is a mine-field of academic controversy. There is room for scholars and conductors taking entrenched positions and making camps because the data is so scanty. Questions abound. Should it be a historically-aware performance with period instruments or a modern orchestra and modern performance practices? What are the correct tempi? How many should there be in the choir? How is the phrasing to be done? Since Bach's Autograph simply indicates a single part for each voice, tempi are a hotly debated and still moot point. There are also very few tempo indications in the Autograph, and in any case radical disagreements about how Bach's contempories would have interpreted those indications, as there were no metronomes! But whatever camp you want to be in, you have to come to terms with the fact that there is no such thing as an authentic performance of this (or any other) piece by Bach. He was an intensely practical man, and although at several points in his career he railed at his employers for not supplying adequate resources for performance, especially in the choral department. He made the best of what was available to him at the time, and quite possibly never performed a work twice in exactly the same way. Furthermore, as women were not allowed to take part in church services at the time, all his choirs and soloists would have been males. Today we have to replace the boy sopranos and altos with women, as in Bach's day the age of puberty and thus the time for breaking voices was not until around 17. At this age, the boys would have had much greater emotional and musical maturity than modern boy sopranos and altos, so there are no direct 'authentic'replacements.

I shall confess to much preferring the historically aware approach with period instruments for Bach. And I shall not dare to mount a full comparison of the many excellent versions of the Missa in order to pontificate on which might 'the best'. The best is simply that one which an individual likes most. Already there are several versions from both camps available on SA-CD, and as I already had the cheap Naxos version by Helmut Muller-Bruhl as a standby option, I have made direct comparisons of that with the new version, played at the same volume level.

Jos van Veldhoven, conductor of the present disc, claims that this is a 'new' performance. Based on his experience with the previous production of the St John Passion, he is convinced that if a complete performance had ever been carried out by Bach, it would have been a small-scale one, based on the long tradition of Baroque performing practice. Soloists, the 'favoriti' or best of the boy and men singers would have been the core of the vocal enemble, just as the best instrumentalists were the core of the orchestra. Van Veldhoven speaks of making an effort to ensure that there was as little difference as possible between the singers and the instrumentalists. Just as the solo instrumental parts are simply part of the ensemble, so the soloists join in with the choruses as members of the vocal ensemble. This is the concertante - ripieno principle of most Baroque music. In fact, he uses 2 persons in each of the vocal parts for the choir (ripeno), with the addition of the soloists when they are not employed in concertante (solo) work. Small in scale, then, but by no means small in sound, and, I think a very common-sense approach.

There are solo parts for two sopranos, a male alto, tenor and bass. On the Channel website, you can watch a Quicktime video about the recording of the Missa, in which Jos explains the reasons for his approach. Fascinatingly, the soloists (who were chosen for voices which would blend with those of the chorus) comment how much they had always been longing to sing the choir's music as well, so this recording was very special to them.

How does all the scholarly preparation come together in this new performance? Well, The Bach Society performers of course have JSB in their blood from many years of specialising in it, and their joy in communicating this to us is palpable. I found this a revelatory experience. This work was compiled by Bach (mainly based on his previous works), as a vade mecum of all Baroque style. At the end of his life, he saw that the New Age was coming, and with failing sight, he realised he was the only one left to set down all the various styles and instrumental/vocal combinations from the Old Age, of which he was such a master. It takes all of the performers' skills to guide us through the amazing array of human emotions in very vivid detail, yet they always have an eye for the word-painting and structure of the whole edifice. You are gripped from the very moment the solemn Kyrie begins and compelled to listen until the last chords die away.

My listening notes are full of remarks about the wonderfully buoyant rhythmic energy with which this Missa is infused; it is not merely a collection of episodes, but an organic whole, an epic journey through the whole Baroque from start to finish. The crown of the mass is of course the Gloria, bursting in with a blaze of trumpet and drum splendour to celebrate the accession of a new Elector in Dresden. Here that energy is released as though from the very fireworks which would have soared over the palace. At full tilt, the chorus has a virtuosic control over articulation, particularly in the spirited fugue with which the Gloria ends, quite taking your breath away.

The Sanctus is the heart of the Missa, if the Gloria is its crown, and I was impressed by the strength of affirmation in the great swinging three-fold cries of "Sanctus!", garlanded by baroque swags of florid instrumental decoration. The sopranos soar higher and higher, and the movement seems to be full of radiant light. Later, the Osanna has an almost Mendelssohnian fleetness of foot with terrifically pointed rhythm. I found it hard not to have my foot tapping all the time, and even did some vigorous air-conducting too!

The soloists, all experienced in works of the period, are the opposite of Wagnerian; pure-toned, with minimal vibration and natural voice production, they consummately match the softer-toned and tonally characterful period instruments which accompany them. I particularly enjoyed the solos of the male alto, Matthew White.

Every track of the Bach Society disc that I compared with the Naxos version showed the Channel performers to be so much more alive, vivid and immediate in their expression. The Naxos recording, in 5.1, was very distant and reverberant in comparison, sounding pallid against the Channel, and the performances sounded just plain perfunctory at times. The chorus was frequently unable to sustain the level of concentration required in the polyphonic sections where there is a great deal of repetition, and frankly I too lost interest and perhaps the will to live at times, not helped by the rather pastel coloured sound of the hazy modern instruments. On Channel, I could hear all the detail, even which instruments were doubling the vocal lines, and the lilting rhythms, subtle phrasings and judicious relative dynamics of the repetitions kept things very much alive. I had no need to follow the score, just listen.

Judging from some shots in the website video of the recording sessions in the Waalse Kerk, Amsterdam, there were plenty of microphones around. In multichannel, the sound is immediate but with a realistic church acoustic glow. Perhaps I might have liked a little more sense of the church around me, but certainly not at the expense of loosing all this wonderful detail. There is excellent front-to-back perspective on the orchestra, with the trumpets, drums and hand-horn appropriately at the back where they catch the acoustic, oboes and oboe d'amore and wooden flutes in the centre, with strings at the front often spatially antiphonal, as is the chorus. The continuo, variously harpsichord, chamber organ, bassoon and bass are always fully in evidence, giving a strong rhythmic impulse to the proceedings. I wondered how the engineers would cope with the problem of the soloists singing with the choir as well as alone - the 'soloists row' in front of the ensemble is very much a later arrangement. I could detect no artificial spot-micing or zooming for solos, and indeed the chamber music-like movements with just instrumental soloists and continuo sounded perfectly in perspective with the overall sonic stage. In stereo, the sound is equally good. In fact at one point I listened for a long time with great pleasure only to discover that I was in stereo mode. Switching to multichannel opened the sound up and extended the front-rear perspective, but there was surprisingly little difference.

Having begun by calling this a luxury box, I must praise the whole production team. As well as the double gate-fold CD wallet, there is a hard-backed book of some 192 pages, in English, Dutch, German and French. It contains valuable essays on the position of the Mass in the Lutheran and Catholic liturgies, an evaluation of the history of the mass's long gestational period and notes on the approach and preparation of the 'new' recording. These are illustrated with handsome photos of contemporary paintings. Opposite the last page of the English libretto, one finds Crannach's portrait of Martin Luther gazing out. Take time to ponder what he would have made of Bach's great Mass! The rest of the book has a photographic study of altar-ware (chalices, ciboria etc) through the ages, taking up the point in the essay on the importance of the mass that congregations went to enormous efforts in ensuring that only the best of everything was the Creator's due. So, too, with Bach. Excellent value for money, this box set, with the discs fully supported by a thorough musical and historical context.

Concluding, I was in awe of the B minor before I heard this recording, but now I feel it has become part of me, a gift of the great humanity of JSB. A humbling experience. 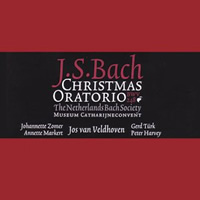 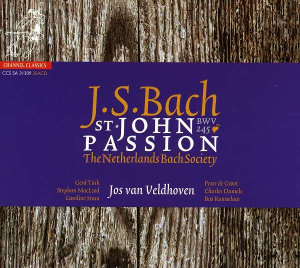 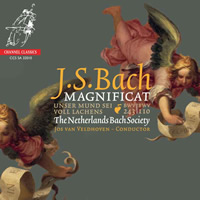 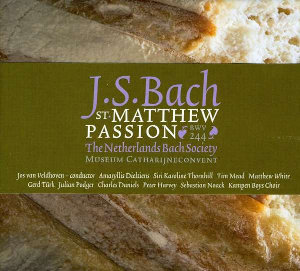