Art of the Guitar - Russell 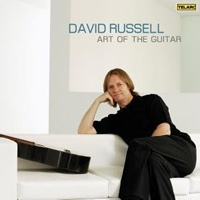 Several decades ago, I attended the first Edinburgh Fringe Festival recital by a very young Scottish-born guitarist who was brought up in Spain, one David Russell. He made a huge impression on my guitar-loving friends and myself, and it seemed to me then that he could be a serious challenge to the classical guitar kings of the world at that time, such as Bream, Williams, Yepes and even Segovia. Well, here he is on his first SA-CD for Telarc, a company for whom he has been recording CDs for some time. He is indeed now internationally regarded as one of the present-day masters of the Spanish guitar, having won many prizes, been given special awards by Spanish towns, had streets and new recital halls in Spain named after him, and receiving a Grammy Award in 2005.

Listening to The Art of the Guitar has been unalloyed joy. The technique is flawless and the artistry and musicianship breath-taking. The listener is hardly concious of the technical problems, except to wonder how on earth he produces the magic without four or more hands. All the virtuoso effects seem entirely natural and are completely at the service of the music, which just seems to flow from his fingers. There are hardly any of the left-hand string squeaks and whistles which many other guitarists produce and which some find distracting. Even these few extraneous sounds are so soft that they can hardly be heard. He has the ability to see each piece as a whole, so placing colour and dynamics to reveal the overall structure, while colouring phrases subtly to extract the essence in the melodic lines. This secure technical base means that even when a melody is accompanied by complex polyphonic accompaniments or tremolos, its overall shape and flow still emerges without hindrance. Runs and scales are so even and beautifully articulated that they can take your breath away. Inner voices rise and fall, adding colour and interest. Not a moment of this recital allows your attention to wander.

According to Mr Russell on the Telarc website “This collection of pieces has been a part of my repertoire for many years. I am happy to finally find a home for them on this recording.” This is not a conventional disc of the familiar Spanish guitar war-horses but has many transcriptions which range from Grieg Lyric pieces, through Debussy to Stanley Myers, with several Latin-American and Spanish contributions which I have not heard before. Julián Arcas’ Fantasia on Themes from Verdi’s La Traviata is a real find, and other finds are Uruguayan composer Abel Carlevaro’s “Campo” from Preludios Americanos, and Hungarian Johann Kaspar Mertz’ “Fantasie Hongroise". Russell's rendering of the haunting theme from The Deerhunter is miraculous, a rendering of such purity and tonal beauty which I found most moving.

The 5.1 recording is exemplary. Quite close, but with air around the guitar and every nuance caught. A photograph from the Russell website of the small recording team suggests it was made in the wooden panel-damped space of the Peggy and Yale Gordon Centre of Performing Arts in Maryland, without any distracting LF rumble apparent. "Presence" is the word that comes to mind, the presence of a superb musician engrossed in performing The Art of the Guitar.