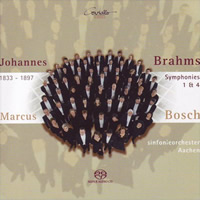 There is considerable competition in the market for Brahms symphony CDs, much less so in SACD realm, although some recent releases have opened this up after a slow start. There has to be something special to attract buyers. In this case, Coviello give us the Aachen Symphony Orchestra, one of the oldest and finest municipal orchestras in Germany, and their present director, Marcus Bosch, who takes on the mantle previously held by conductors such as Busch, von Karajan, and Sawallisch.

The Aachen orchestra is notably smaller than the A List orchestras (who have over 100 players).
Given that Brahms' scores are quite Spartan for Romantic works (about the same instrumentarium as most Beethoven symphonies), I would guess that around 65-70 players were involved in this recording. This is much closer to the size of orchestra that Brahms himself would have conducted (often around 50). The balance between strings and woodwinds therefore takes us nearer to the 19th Century sound, as show for example by the Mackerras cycle on RBCD. Furthermore, in this recording a set of smaller than usual tympani were used, and they were played with hard sticks as in Brahms' and Beethoven's day. This makes a surprising difference to the rhythmic impetus of these works, as can also be heard in Haitink's LSO Live Beethoven series. It seems that a distinct effort was made to have a period-aware approach. With the scoring opened up, I was constantly noting the beautiful clarity of texture in both aymphonies. There was also a very strong sense of Brahms' debt to Beethoven, within whose shadow he often felt trapped.

Both of these symphonies are given very fine performances for live recordings (two takes were available for editing). Bosch has a very clear grasp of Brahms' structural plans, and places the true climaxes unerringly in each movement. The band responds splendidly, with expressive and agile playing in all departments. The dramatic opening of the First, with its relentless kettledrum strokes sounding like the tread of Fate itself, is arresting, and recalls a similar effect in the 'Den Alles Fleische' movement of Brahms Requiem. I found Bosch's urgency and passion in this work more convincing than the sometimes flabbly Allsop version on Naxos, although he does omit the first movement exposition repeat, which bothers some people. The only other caveat I have in Symphony 1 is the otherwise splendid first horn's micromanagement of the appearance of his 'Alpenhorn' solo in the introduction to the last movement. Listeners should be aware that there is over half a minute of enthusiastic applause after each symphony. Some will hate this, but I found it an appropriate emotional release, and in MC it is very realistic surround sound.

The Fourth symphony is given a really cracking reading, quite a bit faster than Haitink's LSO Live disc in the first two movements. The whole work has a satisfying strength and lyrical power, and the journey through the great final Passacaglia is thrilling. No problems here about the first movement repeat as Brahms had stopped using them himself.

Coviello's sound in 5 channel MC is very natural, with a good sense of the hall but lacking the ultimate sonic hologram effect which true DSD can bring. In addition, it seemed to me that the upper string tone tended to have a little glare at the top when pushed hard. Nevertheless, a very enjoyable sound with a nicely detailed sound-stage. Both CD layer and SACD Stereo tracks are fine, the Stereo a little dry.

The packaging, in a normal SACD clamshell, is attractive and up to Coviello's usual high design standards, including a very useful essay on the symphonies by Kai Wessler, which eschews technical jargon and is well translated into English.

These are certainly performances which I can live with, and if you prefer a lean and hungry Brahms to a staid and overfed Brahms, then give this disc a try. 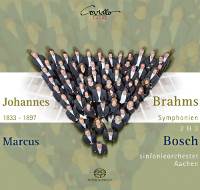