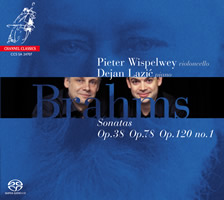 Only one of the three works on this release was orginally written for cello and piano - the Op.38 sonata in e minor. The other two are transcriptions of the violin sonata Op.78 and the clarinet sonata Op.120/1. Taking the latter two works first, it was quite a shock hearing a familiar tune being played by an unfamiliar instrument. Of these two transcriptions, I think the violin sonata works best for the cello. I'm not one who insists on hearing a work performed only by the original instruments so I really enjoyed hearing Op.78 in this instrumentation. The cello is my favorite stringed instrument and it makes a striking impression in this recording. Wispelwey and Lazic provide a solid performance.

The Op.120/1 transcription is a bit less successful in this combination. The work is more somber and melancholy and the sonority of the cello is almost too much of a good thing. I find a similar conclusion when I hear this work in its other transcription for viola/piano. Brahms was right in scoring this for clarinet which I believe add more interest to the sound of the piece. I find the performance here to be a bit subdued.

As for Op.38, one must be aware that Wispelwey and Lazic make a big cut in the first movement. Compared to other versions, they lop off about 3 and a half minutes of music. I don't have a score but I imagine they have dropped an exposition repeat. Too bad since the disc could have easily accomodated the extra music. What they do play, they play very well. All the more disappointing that they left music out. I did some comparative listening to this along with Wick/Devoyan (Audite SACD) and Henckel/Westenholz (Bis AAD RBCD). Both of the latter play the complete first movement so immediately they get an edge over the Channel SACD. Of the three, I slightly prefer the Henkel/Westenholz on Bis - this is a really wonderful, romantic performance in great AAD sound. After that, I would place Wispelwey/Lazic who give a solid performance. I don't recommend the Audite - it is a bit boring and routine.

Now the sound. It is really important that the volume level be set correctly for this Channel release. It is recorded at a very high level so your normal listening volume will be too high from the outset. However, once the volume is set properly, the performers lock into place and the recording itself is outstanding. The full bodied sonority of the cello is beautifully captured while the piano sound is quite acceptable if ever so slightly muted compared to the cello. That's really a quible though. The sound (in stereo) is wonderful. I wa somewhat worried that the high recording level would mean that the dynamics would be reduced but I did not find that to be the case. Dynamics sound nice and realistic to me.

Highly recommended but with the significant caveat about missing music in the first mvmt of Op.38. That lowers my performance rating from 5 stars to 4.5.