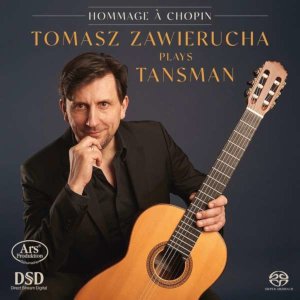 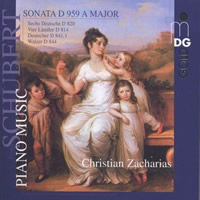 
Spontaneous Idea
The idea first occurred to us spontaneously during a concert. The festival public was listening to the magic of Schubert’s Sonata in A major as if spellbound, and suddenly we knew: We just have to record this sonata! And the second coincidence: a free day for a recording session was spontaneously found in the pianist’s packed travel journal. The result: a super audio CD now being released in connection with the decision of the MIDEM Classical Award international jury to name Christian Zacharias "Artist of the Year 2007". Congratulations!

Art and Life
Some five hundred dances by Schubert have come down to us, but many of them are extant today only in the form of sketches creating the impression that the composer quickly committed them to paper after a genial improvisation. His friends were fond of employing them during the Schubertiaden held in private circles, and they are also known to have been performed in concert, after the presentation of one to two sonatas, in what was a quite informal transition between art and life. Only a few pianists are able to convey these seemingly so simple dances with the feathery lightness with which Christian Zacharias interprets them here on a Steinway D concert grand piano.

Sonata Trilogy
Not too long before his death, Schubert created a sonata trilogy endowing the various keys with a special program. The Sonata in A major composed during the summer of 1828 symbolizes “Youthful Mirth and Trust in God.” Its first movement contains an element also employed by Schubert in the other two sonatas: a short and succinct rhythmic formula from the “Atlas” lied from his Swansong cycle.

World Elite
No doubt about it: Christian Zacharias belongs to the world piano elite. His recordings on MDG have won numerous prizes and awards. It is thus not surprising that his recording of the Trout Quintet (with the Leipzig String Quartet) clearly bested all the other twenty-one recordings in a blind test conducted among reviewers of the Répertoire music journal.

After Schumann: Piano Concerto - Zacharias, I approached this disc with a great deal of caution. Fortunately, such reservations were unfounded and I enjoyed the playing much more. There is competition of the main work, the Sonata in A D959 (found on Schubert: Piano Sonatas - Thomas Günther and in a less recommendable account Schumann, Schubert: Piano Works - Kawamura).

Compared to Thomas Günther, Zacharias takes a more outwardly expressive and Romantic approach to the music. Some may not warm to this ideal but I found it enjoyable, even though I felt that he emphasised the sunnier side to the music and occasionally brushed over the angst contained in a great many passages, especially the slow movement. The tempi are conventional (in the best sense of the word) and there is nothing mannered in his approach; his rubato is natural and responds well to the character of the music. Particularly effective is the introduction of the octave writing at the beginning of the slow movement - it really sings. All repeats are observed to make a satisfying whole of the glorious piano music Schubert left us.

The make weights are short but sweet - there was surely room for a more substantial set of "encores" (either by carrying on the set of dances or perhaps the Moments musicaux), well played miniatures as these dances are by Zacharias.

The sound is good but the piano is not in the best condition. It has a decidedly thin and hard tone quality (which I believe is deliberate so that it approximates an older style of keyboard instrument) but less forgiveable is the lack of care in the tuning; this is something that reduces much of the value of Zacharias' hard work - try to sample the disc before purchasing to see if it would be off-putting upon repetition as I found it. The close miking also contributes to a fortepiano-esque style sound. The rest of the sound characteristics are good without being exceptional.

Recommended with some reservations.

The piano is in tune and, irrespective of its 1901 date of manufacture, sounds much like a modern Steinway - I have a 2+2+2 setup and the sonics are excellent. The review is otherwise accurate.