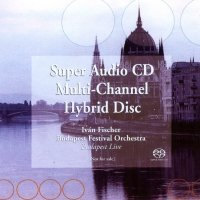 A first class demonstration disc that shows how well the BFO play under Fischer in concert.

The disc tapes one of the BFO's famous "Coffee concerts" and is a collection of some favourite pieces together with some uncommon repertoire. Opening the proceedings is one of Dvorak's most famous Slavonic dances (Op. 72/1) and compared to Dvořák: Slavonic Dances - Fischer, one can say that the engineering team found it harder to cope with the acoustic signature "live" than in the studio 1-2 months previously. The performance is also markedly different with heightened rubato and dynamic contrasts that would be quite thrilling in concert but arguably work less well upon repetition. Bartok's Romanian Folk Dances (orchestrated for strings, clarinet and flute) follow and is given one of the most exciting performances on disc - if your feet don't start to tap during this, seek urgent medical assistance!

The orchestra then take a break and allow the Children's Choir Magnificat of the Ferenc Erkel Secondary School (Budapest) to take centre stage in three short works by Kodaly; their sound is far richer than those used to the tradition of English choral singing and is very spirited as well as sensitive when required. Back to the BFO for Liszt's 4th Hungarian Rhapsody in which several of the principals get to display their individuality in the many solos - this is playing that makes Karajan's celebrated account sound very staid by comparison (and that is saying something!) The leader Jozsef Lendvai then takes centre stage to play a very fine account of Sarasate's Zigeunerweisen which is far more idiomatic than Mutter makes it here: Carmen Fantasie - Anne-Sophie Mutter but has a few fluffed notes that would surely have been corrected in a studio account.

The orchestra once more take a break while first Oskar Okros gives a sensational rendition of an improvisation on themes by Bach and Liszt before a whimsical traditional Hungarian melody is played by Lazlo Kiss Gy. For the final section of the programme, the BFO and Fischer play a fantastic Bolero; absolutely hypnotic and for once, the dynamic range is as wide as it should be - one doesn't tire of an account like this. Two encores from Strauss junior follow: Long Live the Hungarians and Peasant Polka - both are dispatched with a thrilling sense of joy. It is interesting to hear such works played by a top orchestra other than the VPO - the sound is richer but no less idiomatic.

The recording is a little bass-heavy but the ear quickly adjusts and soon has one revelling in superb music making that one feels one could stand up and approach the platform - a remarkable sense of realism. The surrounds are well balanced and quickly reveal themselves at the end of each work when the richly deserved applause envelopes the listener. For a one-off taping, the audience is remarkably quiet.

Obviously not commercially available (a great shame) but if you do see a copy come up for sale, it is well worth obtaining. 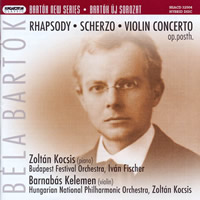