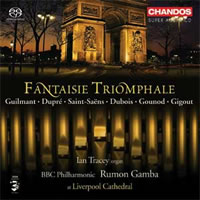 This is the third in a series of CDs from Chandos featuring works for organ and orchestra from the late Nineteenth Century, and the first of these to be issued as an SA-CD. It was recorded in Liverpool Cathedral, the second largest Anglican Cathedral in the world. Its 5-manual, 2-pedal board Father Willis Grand Organ organ is one of the largest in the world, to match the vast building which houses it - the nave alone is 120 ft high (36.5m) and 619ft (188.67m) long. According to a feature by the organist, Ian Tracy, in the May 2007 BBC Music Magazine, the problems of synchronising from the organ loft to the BBC Philharmonia on the floor of the Nave were enormous, and they had to use a separate console (electronically controlled) on the floor. Even then the organist had to anticipate the orchestra by 1.5 seconds or so.

The music was unknown to the players; it had to be searched for in old catalogues. Many of these pieces were occasional in nature, written for specific events, and never became "repertoire" pieces because of the expense of including an orchestra and their demand for the very largest Cavaillé-Col organs. In the decades around the end of the C19th, the French Romantic organs had become the equals (or betters) of the orchestra in tone colours and sheer dynamic power, and it was fashionable to put the two together, or rather to pit them against each other. All of the composers represented here were at this period in their careers associated with such an organ. Father Willis, as organ builder, had much contact and exchange of ideas with Aristide Cavaillé-Col, so the Liverpool organ is well-equipped to play the part of a great Parisian organ.

If you are expecting a work of the quality of the Saint-Saëns Organ Symphony, you will be disappointed. There is another reason why most of these pieces were consigned to the archives; they are but the chippings of the masters, not great works. Their themes are mostly unremarkable, they are mostly episodic and lack proper development - there is a great deal of time-filling "doodling" and interminable repetitions of short phrases in order to reach a climax in all of them. The climaxes are great at first, but eventually the bombast and rhetoric becomes tiresome, so I would suggest listening to one or two tracks in a session. Musically, I though the best pieces were the four separate movements by Guilmant (Tracks 6-9), being the most original and best structured. All these works did their job on a grand occasion, when the atmosphere of the event was paramount, and produced a thrilling spectacle. You might want to listen to them once or twice on this SA-CD, but they don't invite familiarity - for which your neighbours will thank you.

It is therefore as sonic spectaculars in multi-channel that we must view the pieces on offer here. Given the horrendous problems in recording this gigantic organ in its vast edifice together with an orchestra, the results are certainly spectacular, indeed thrilling. Ralph Couzens, the Chandos engineer, is one of the UK's top experts in microphone placing, and he has done the best that could possibly done under the circumstances. The DSD transfer copes with an enormous dynamic range, the surround set-up gives an amazing account of the vastness of the cathedral - the dying reverberations last for around 6 seconds. Because of the heavy imprint of the very wet ambience, however, detail inevitably suffers, particularly during quieter sections. The poor orchestral strings, being instruments never meant for playing in the 'open air', often sound whiskery and lost in the echoes, while the brass and woodwind (of outdoor origin) do very well. Multiple microphones can only do so much, as they all pick up both organ and acoustic. The organ itself seems to recede to the end of the building when the quieter stops are engaged, but it is still possible to admire the quality of the solo colours chosen by Ian Tracy. In general, I found that I had to play the disc several notches louder than normal to get the orchestra fully in focus and give the strings enough impact. Lovers of 32ft organ pedals will relish the fundamentals which this organ and building produce, and there is deep bass aplenty on the disc, even though it is 5.0. If your amp passes the LF to a subwoofer, you will hear these trouser-flapping frequencies.

I had some difficulties in deciding on a useful star grading for this disc - the main problems being the unmemorable music (for which there are no stars to be awarded, but I would have graded a 3 star average), and the extremely reverberant character of the building itself. I suspect that personally being present in that space would be a sonic experience to remember, but to try and reproduce that in a mere domestic room, even through 6 speakers, is impossible. Given that, as far as I can tell, all the performances were excellent, especially for totally unfamiliar works. And the sonics are the best that could be engineered and compressed into our sitting rooms at the present state of technology, so 5 stars all round. I did sample the SA-CD stereo track, and as might be expected, the orchestra had more presence as there was less ambience.

Buy if you want your socks blown off from time to time, but avoid if you want the best music of the composers concerned. By the way, I think the organ wins in the power contest. 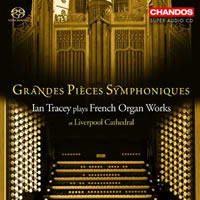