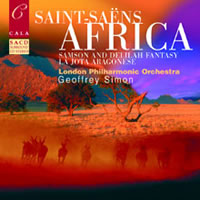 After the seemingly never-ending flow of Mahler and Shostakovich symphonies appearing on SACD it is a pleasure to welcome an orchestral disc full of pure enjoyment and one whose content is unlikely ever to be duplicated.

Cala’s second SACD of Saint-Saëns rarities is even more delectable than the first Saint-Saëns: Requiem, Symphony No. 3 - O'Donnell / Simon. The composer’s penchant for elegant lines, engaging melodies and clarity of expression are illustrated by all the pieces recorded here.

Gwendolyn Mok gives a whirlwind performance of the attractive Africa-Fantasy for Piano and Orchestra matched by the alert accompaniment of Geoffrey Simon and the LPO. It is surprising that this gratifying work is not as popular or well known as the Saint-Saëns five Piano Concertos.

The Samson and Delilah-Grand Fantasy arranged by Luigini (of Ballet Egyptien fame) is great fun. It is a pot-pourri of music from the opera, only hinting at the Bacchanale, but with Delilah’s famous aria ‘Mon coeur s'ouvre à ta voix’ given the full ‘Hollywood’ string treatment.

Perhaps the most intriguing piece on the disc is the original vocal version of the well-known Danse macabre, a setting of a poem by Henri Cazalis that Saint-Saëns later arranged for voice and orchestra. Anthony Roden sings this with a modicum of Gallic style and great panache.

The most substantial piece is the fifteen minute ‘The Muse and the Poet’, a lovely work for Violin, Cello and Orchestra, from the composer’s old age. Stephanie Chase and Robert Truman play the piece with much sensitivity and finesse, making the most of the lyricism that alternates with more rapid and dramatic sections.

The remaining, equally enjoyable, six items on the disc are:

Although Saint-Saëns never quite reaches the level of inspiration of his greatest compositions, the enthusiastic and committed performances by Geoffrey Simon and the LPO ensure that the generous 78 minutes of music on this disc is communicated with appealing freshness and a winning charm.

The re-mastering for SACD and the creation of an excellent surround mix (ambience only) from the original (1993) recording has again been expertly carried out by Phil Rowlands, while Edward Johnson’s informative booklet notes are a model of their kind. Definitely recommended.

As far as I recall, the recording was in PCM at 44.1/16 so don't quite understand how this could have been remastered into an SACD of acceptable sound quality. I guess Graham it is far too long ago to remember if the disc is worth buying? I have the CD and agree with your comments on performance.