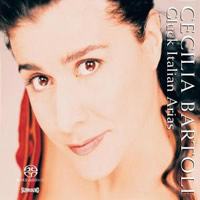 Cecilia Bartoli is a very distinctive artist who, rightly, commands a lot of attention but has more recently developed an over-interpretative approach that puts many off her singing. This disc flirts with this annoying feature of Bartoli's artistry but fortunately for the most part it is restrained and this disc is, on the whole, very enjoyable. It is also nice that Bartoli doesn't apply her (previously characteristic) Supervia rattle to everything that she touches. The music is a wonderful revelation to me of early-Classical music (Mozart would just be starting to toddle as the ink was drying on the last of these scores). Whilst not being on quite the sublime level of Orfeo & Eurydice it is still distinctive, enjoyable and for the most part memorable for all the right reasons. As all of the arias on this disc except for "Quel hiaro rio" and "Se mai senti spirarti sul vulto" are claimed to be world premier recordings, one wonders what else may be hiding in Gluck's output...

The disc with the first of three arias included from Gluck's take on La clemenza di Tito, "Tremo fra' dubbi miei". After a vibrant opening from the superb Akademie für Alte Musik, Berlin (who play with real verve and delicacy by turns throughout the disc) the openly virtuostic vocal line is given a tour-de-force from Bartoli and one occasionally would prefer not to be reminded so incessantly of the (admittedly superb) technique that Bartoli possesses. This is probably as bad as it gets on this disc, so if you listen and it doesn't grate too much then I can easily recommend the remainder of the arias.

The second, much more calming in mood, aria is "Di questa cetra in seno" from Il Parnaso confuso. Here Bartoli just sings with a radiant purity and simplicity - it is a joy to listen to singing and playing like this.

After "Misera, dove son!" (a recitative) the aria "Ah! non son io che parlo" from Ezio is a highly contrasted piece, with very dramatic sections and one contrastingly reflective moment. Bartoli keeps the simply style from the second aria in the simpler moment but when the more excitable style of singing called for, the over-interpretation aspects of her style are nowhere nears as prominent as before which makes for an enjoyable experience.

A very graceful and simple recitative "Ciascun siegua il suo stile" and aria "Maggior follia" from La Semiramide riconsciuta completes the first half of the disc which has very restrained virtuosity in the music and I am glad to say that Bartoli largely respects this.

"Quel chiaro rio" from La corona opens with a lovely, soulful melody from the orchestra which Bartoli reflects the delicacy of the playing that has just preceded her entrance. At 1'30 an abrupt change in tempo and style occur into a very virtuostic and urgent passage which takes all of Bartoli's talent to negotiate (and thus precludes any over-interpretation). The music then reverts to its opening style at about 2'45 for a brief moment and then rejoins the more florid style of music.

The opening recitative ("Ah, taci, barboro") of "Come potesti, oh Dio!" (La clemenza di Tito) is a little overwrought in my opinion - Bartoli is seemingly not content to let the music speak for itself whereas the orchestra seems to judge the fury just right (the phrase "classical restraint" did not come about by accident in my opinion). The abandon in the main aria works much better especially when contrasted against the repenting passages which Gluck instils with real tragedy.

A very beautiful oboe melody opens "Se mai senti spirarti sul volto" (the last of the three arias from La clemenza di Tito) which Bartoli takes on and matches the simplicity of expression that was used in the orchestra. Wonderful singing, with drama at times, of a very pretty but sad song. There is a brief, slightly more agitated section in the middle but calm is soon restored - probably my favourite aria on this disc & it shows that Bartoli can be far more than just coloratura when she chooses.

The final aria "Berenice, che fai?" from Antigono opens with a slightly too hysterical performance (even allowing for the characters' lover dying!) but quickly settles into the highly contrasted main body of the aria with very sensitive singing and virtuosity as required.

The excellent notes are from Claudio Osele, who prepared the final aria on this disc for performance. He clearly explains the context of the works in Gluck's life and also concisely gives the narrative of the opera from which the aria's come from. A model for writing about "new" discoveries in the confines of liner notes in my opinion.

The sound is very fine with the rears just giving (a little too much?) ambience; throughout the orchestra and Bartoli are very accurately represented and is one of the finest recordings (in MCH) from Universal (apart from the BFO/Fischer discs) that I have heard - quite apart from no artefacts being imparted to Bartoli's voice, the bite to the strings and the plangent tone of the woodwinds is excellent.

Overall, one of the best early-Classical SACD's I have heard.